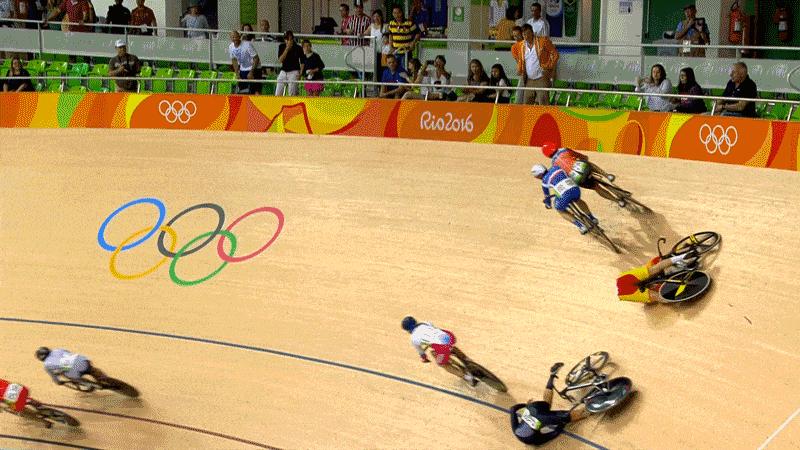 Laurine van Riessen managed to stay on her bike after being pushed wide in a high speed collision...by riding on the vertical boards
by Laura Laker

Dutch cyclist Laurine van Riessen gave an incredible display of bike handling during the women’s Keirin event when she ended up riding the vertical boards on the Olympic velodrome in Rio on Saturday.

Van Riessen, who was pushed wide in a high speed crash, managed to ride the vertical surface of the hoardings before rejoining the boards fully upright and still on her bike. France’s Virginie Cueff collided with her, pushing her up the bend, while Spain’s Tania Calvo and New Zealand’s Olivia Podmore were sent crashing out, fortunately not seriously injured.

Although Van Riessen missed out on qualifying, she finished fourth and, via repechage, went through to the second round. Countrywoman Elin Litglee went on to win the  keirin gold, beating Britain's Becky James, who won silver. Van Riessen came in ninth.

Photo of the day! @LaurinevRiessen pushed wide during a crash, rides the wall & remains upright! What skill! pic.twitter.com/Oaf5TZezhD

Commentating on the keirin event, Rochelle Gilmore, former racing cyclist and Wiggle High5 team owner and manager, said: “We’ve never seen a rider hold it up like that before, that was incredible.”

As well as cycling, 29-year-old Van Riessen is a long  track speed skater, and won a bronze medal in the 1000m of that discipline at the 2010 Winter Olympics in Vancouver.

The Keirin is known as one of the most dangerous of the track cycling events because of the high speeds riders achieve.