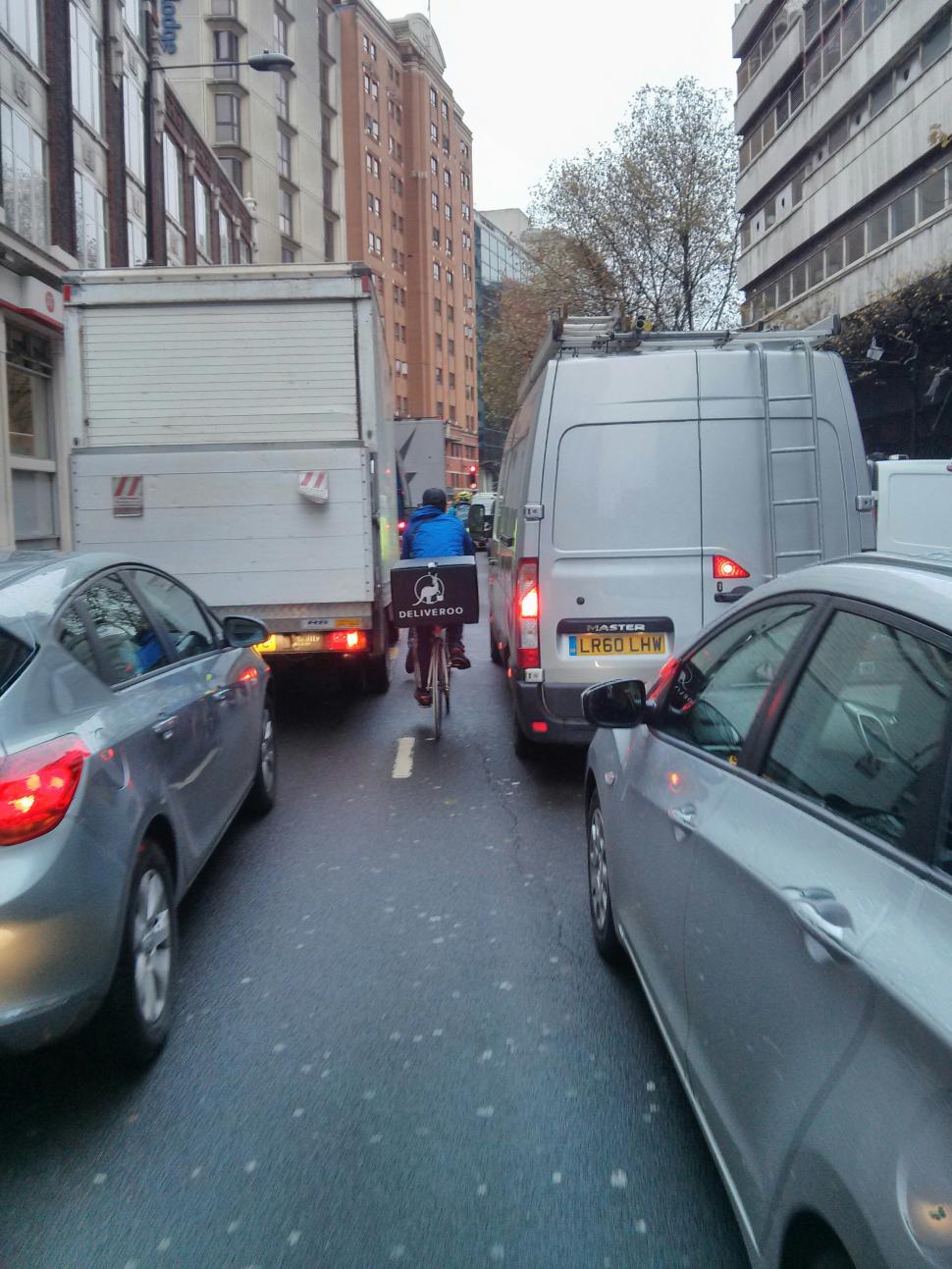 Government says employers can't ignore pay responsibilities, while union says the company is holding a "gun to the head" of workers on new zero hour contract...
by Laura Laker

Deliveroo cyclists have voiced concerns to road.cc about receiving below the National Living Wage if proposed changes to contracts are made, as strikes are set to continue for the fifth day running over pay and conditions.

North London Deliveroo drivers received an email their £7 per hour rate, plus £1 per drop fee, would be replaced next week by a £3.75 per delivery payment, prompting the Independent Workers Union (IWGB) to demand Deliveroo pay the London Living Wage of £9.40 per hour, plus a drop fee and maintenance costs. The Union, which says workers who don't sign will be out of a job by Wednesday, are now calling on the public to boycott the company, and for businesses who rely on Deliveroo drivers to support their demands.

Meanwhile the government appears to have entered the debate by pointing out employers cannot shirk their responsibilities to pay the National Living Wage (NLW), which is currently £7.20 for those 25 and over.

Hundreds of Deliveroo drivers (a term which includes all delivery riders, including those on bicycles) have staged protests outside the delivery firm’s head office in central London since Wednesday, and are set to continue tomorrow. The IWGB said Deliveroo offered on Friday to pay at least two to three delivery fees in peak times until mid-September but this was rejected by the Union, who said any pledge to an hourly rate needed to be long-term and cover all shifts.

Chair of the IWGB’s Couriers and Logistics branch, Mags Dewhurst, told road.cc the Union was called in to negotiate what she describes as a crisis situation. She said: “Deliveroo are holding a gun to people’s heads, saying to people ‘you have one week to accept this new contract’.”

“[Deliveroo] said to us ‘these people are entrepreneurs’," said Dewhurst.

“They’re not entrepreneurs, they’re just guys on bikes and if they are not working for [Deliveroo] they’re working for Uber, working two part time jobs.”

Dewhurst is concerned changes mean Deliveroo is not taking into account, or paying for, the time drivers spend waiting for orders to come through.

The trial agreement change is proposed for riders operating in Camden and West Hampstead, and Dewhurst estimates up to 200 riders could lose their jobs if they refuse to agree to the new terms. A London-based Deliveroo rider told road.cc the fluctuating demand for food deliveries, and an increase in new riders, means she can sometimes go a shift with little or no work. Under proposed changes her pay would fluctuate, too.

She said: “The problem is if there’s not loads of orders you could be sitting round for nothing; if it’s not busy you might do two orders in a [three hour] shift then you’ve got, what, £8?”

“There are days when you sit down and for three hours there’s just nothing. The app [that allocates deliveries to riders] works on algorithms, but they also overstaff of understaff. The food industry is really unpredictable, it’s based on the weather; if it’s really sunny, like it has been recently, nobody wants to order food, they all want to go out. Whereas … when it’s raining we get loads of deliveries.”

She said an influx of riders earlier in the year effectively halved her workload.

“I used to average between six and twelve orders in a three hour shift, and now I’m averaging three or four.”

“When the new riders started, all of us old riders we just got nothing, we were orderless, and all the new drivers had like nine orders, it was a really weird moment.”

A York-based Deliveroo driver told road.cc the supplier agreement changes will offload the risk of quiet periods onto the drivers. He said: “At the moment it’s in both the company’s interest and the riders’ interest to be busy and that’s great - we would much rather be cycling than hanging around for a job - but under the new payment per trip system it’s in the company’s interest to have as many drivers as possible.

“As an employee you don’t have any control over the work you do, it is the app that controls it. In theory the more hours you hang around the more jobs you will get but with more riders hanging around I rather suspect that people’s pay per hour will decrease.

“This is a much bigger, wider question it’s about neoliberalism, where you get more and more businesses using a workforce onto which they can offload the risk. See also Sports Direct.”

A Deliveroo “supplier agreement” seen by road.cc, implemented earlier this year, and predating the new trial contract, informs riders “You are a self-employed supplier and therefore acknowledge that you are neither an employee of Deliveroo, nor a worker within the meaning of any employment rights legislation.

It goes on: “You further warrant that neither you nor anyone acting on your behalf will present any claim in the Employment Tribunal or any civil court in which it is contended that you are either an employee or a worker.

The agreement states the fee of £7 per hour and £1 per drop “may be varied depending on the day, time and location” and may be discontinued by Deliveroo and moved to a delivery fee model.

In a statement the Department of Business, Energy and Industry Strategy (BEIS) said signing a "type of contract" was not justification enough for not paying the NLW. While not specifically mentioning Deliveroo, the statement reflects concerns raised among the public and riders. It said: "The Government is determined to build an economy that works for all – that includes ensuring everyone gets a decent wage."

"An individual’s employment status is determined by the reality of the working relationship and not the type of contract they have signed. Individuals cannot opt out of the rights they are owed, nor can an employer decide not to afford individuals those rights.

"Employers cannot simply opt out of the NLW by defining their staff as self-employed.”

Dewhurst has voiced concerns Deliveroo is trialling the new agreement in less busy parts of London - the scheme was trialled in Chiswick earlier in the year with a £4.25 drop fee - but worries it will eventually be rolled out across London, with a lower drop fee in busier areas.

Deliveroo says 80 per cent of drivers they polled reacted positively to the proposed changes, because they wanted more flexibility. They claim drivers who are striking do not understand the conditions of the new agreement and that those who work hard will benefit from the changes and earn up to £12-13 per hour at peak times.

Deliveroo said: “What we have seen from previous trials that we have been running in other parts of London is that riders have reacted positively to the trial, and fees rise to more than twice what they were over a lunch or dinner, compared to the old payment model.”

A crowdfunded campaign to support striking Deliveroo drivers has raised more than £6,000 in two days, of a target £10,000. The IWGB says businesses have complained of hundreds of pounds of lost income since the strike and are calling on companies to support workers. Further strikes are planned outside Deliveroo's London recruitment offices tonight and tomorrow, and its head office tomorrow evening and all day Tuesday.

Dan Warne, MD of UK & IE at Deliveroo, told road.cc: "We're committed to having an open conversation with riders about this trial.  We’ve reached out to every rider involved to gather feedback. We’ve listened to their concerns and  offered every rider the choice to withdraw from the trail. For those that choose to take part in the trial we’ll also be guaranteeing fees at peak times for riders will be at least £7.50 per hour plus tips and petrol costs.”