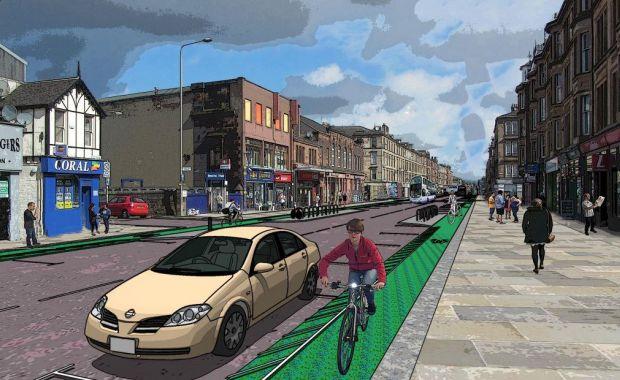 A new £6.5m segregated cycle route has been given the go-ahead in Glasgow. The 3km-long South City Way is set for completion in summer 2018.

The Scotsman reports that the new route, which will run between Queen’s Park and the Merchant City, has won £3.25m of the Scottish Government's Community Links Plus funding – a sum that will be matched by Glasgow City Council.

Announcing the funding, minister for transport Humza Yousaf said Glasgow City Council had shown real ambition and a clear vision of how to improve conditions for people who choose to walk or cycle along what is a major commuter route. "Transport Scotland supports projects which take active travel to the next level and this project will certainly do that by encouraging more people to make everyday journeys by foot or by bike,” he said.

“We’re hopeful that Scotland will become a leading example of why places that integrate people moving by foot, bike or public transport are more attractive places to spend time and money, and this leads to stronger local economies and healthier people than places designed around vehicles.

“The South City Way will improve travel choices and accessibility for residents and visitors. Simultaneously, it will reduce congestion, improve air quality, enable easier use of public transport, and create places where people want to socialise, shop, and linger in.”

Institution of Civil Engineers Scotland director Sara Thiam was a member of the Community Links Plus judging panel. She said she had been impressed by the “truly segregated nature of the route” adding that it had been “very well thought through.”

GoBike!, the Strathclyde Cycle Campaign, did however sound a note of caution, saying that lessons needed to be learned from inadequacies in existing infrastructure. Convenor Tricia Fort said:

“The West City Way cycle route from Central Station west to Kelvingrove has some very useful bits, but is not overall to a high standard and connections into it are poor, with inadequate signing.

“It was the first attempt in Glasgow and the city council needs to learn from this. The South-West City Way between the city centre and Pollokshields is much better. There is one short bit of shared footway and a poorly-signed junction at Carnoustie Street, but the route is well used and it takes people from where they live to where they want to go.”