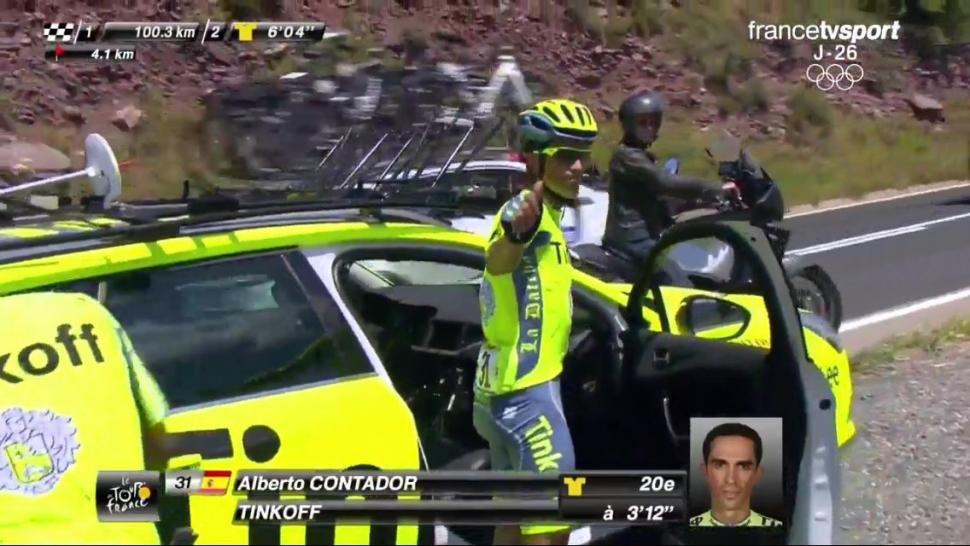 Doctor reveals extent of Tinkoff rider’s injuries – but contrary to reports, there are no leg fractures
by Simon_MacMichael

MRI scans have revealed the full extent of the injuries that Tinkoff’s Alberto Contador, who abandoned the Tour de France on Sunday, sustained after crashing on each of the first two days of the race, and they are likely to keep him out of the Rio Olympics next month.

The Spaniard, who had struggled since the opening weekend, left the race with 100km remaining of Sunday’s Stage 9 to Andorra-Arcalis after developing a fever overnight.

After undergoing a scan, he has been all but ruled out of the Olympic road race in Rio next month, although he hopes to ride the Vuelta, reports the Spanish sports daily, Marca.

Contador, aged 33, appeared today at a press conference in Madrid with Dr Manuel Laws of the CEMTRO Clinic in Madrid, who also treated him in 2014 when he crashed out of the Tour de France with a broken tibia.

While some English language reports maintain that Contador suffered three leg fractures in his crashes at the race the weekend before last, that seems to have been an error in translation.

Dr Laws said that Contador’s injuries comprise "multiple contusions, a hamstring injury grade two on the vastus intermedius muscle of his left thigh, a hamstring injury in the twin of the same leg, and bruises on the supraspinatus muscle on the left shoulder and the deltoid of the right thigh ".

He added that the injuries had impeded Contador’s ability to pedal during the past week, and that he would need four weeks to recover, with complete rest in the next fortnight.

"We know their ability to sacrifice, but the discomfort is serious in two muscles that Alberto constantly employs," he added.

“The prospect of the Games is practically over," said Contador, who looks set to join Trek-Segafredo for 2017, although changes of team cannot be announced until 1 August.

"The goal is to recover for the Vuelta,” he added. “It’s a blow to my morale because the Games were my second big goal of the year and I’ve had to discount them."

1
Cyclist punched repeatedly by motorist in road rage incident
2
Cyclist "luckiest man alive" after tumbling down "crazy" brick staircase on cycle route's steep hill
3
"That's why it's so shocking": Colin Strickland says on-the-run murder suspect Kaitlin Armstrong "one of the least volatile people I have ever met"
4
Near Miss of the Day 789: Sensible discussion and apology follows learner close passing cyclist during driving lesson
5
How many miles do you get from your tyres? Plus new stuff from Hutchinson, Santini, Le Col, HUUB, and loads more
6
UCI downgrades RideLondon Classique due to “unacceptable lack of respect” for teams and riders
7
“This could be his GC over”: Joe Biden falls off bike after getting foot caught in toe straps
8
Near Miss of the Day 786: “They have been behind you for some time” – Police say close pass isn’t careless as cyclist didn’t change direction