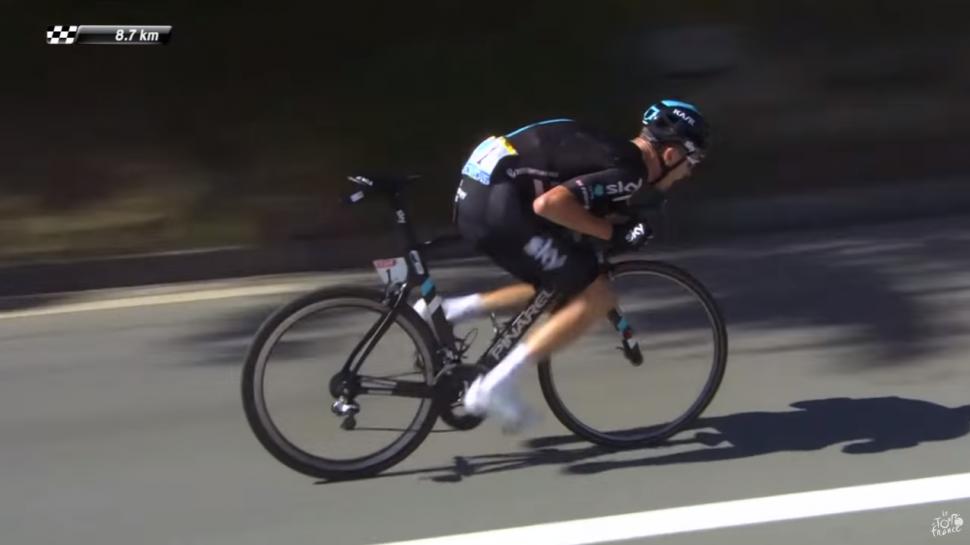 Yesterday's Tour de France stage winner, Chris Froome, has been fined by race officials for an incident on the final climb of the day which saw him hit a fan in the head.

Froome's spectacular descent to victory yesterday was somewhat overshadowed by the incident on the ascent of the Col de Peyresourde which saw the two-time Tour de France champ lash out at an encroaching Colombian fan.

While the stage winner defended his actions in the post-ride press conference, race officials didn't feel the same way as they fined Froome 200 Swiss Francs for 'incorrect behaviour'.

The Team Sky rider told the gathered press after the race that he was not targeting Colombians, rather he was just reacting to a situation he felt was "getting dangerous."

"Nothing against the Colombian fans," Froome told the press. "I think they’re fantastic and bring a great atmosphere to the race. But this guy in particular was running right next to my handlebars that had a flag that was flying behind him. It was just getting dangerous, so I pushed him away, I lashed out and pushed him away."

This isn't the first incident in which Froome's been forced to react forcefully to fans running alongside him at the Tour de France, a very similar incident occurred during the 2013 race while he was in a breakaway with Colombian Nairo Quintana.

Froome, however, was quick to praise the fans for turning out in such great numbers, but reminded them of the risks of getting too close.

He said: "It’s fantastic having so many fans out on the route but please, please, I urge the fans: don’t try and run with the riders. It’s get really dangerous for the guys behind."

The Olympic bronze medalist also took to social media to defend his actions, and also taking a moment to apologise to the fan he hit - going to the effort to say sorry in Spanish.

Getting abuse for the hand off of the spectator, camera doesn't show his flag almost going into my front wheel & across my handlebars!

In English the apology tweet reads: "Apologies to fan the that I pushed today - I was worried about how close you were, with the danger of having a fall!"