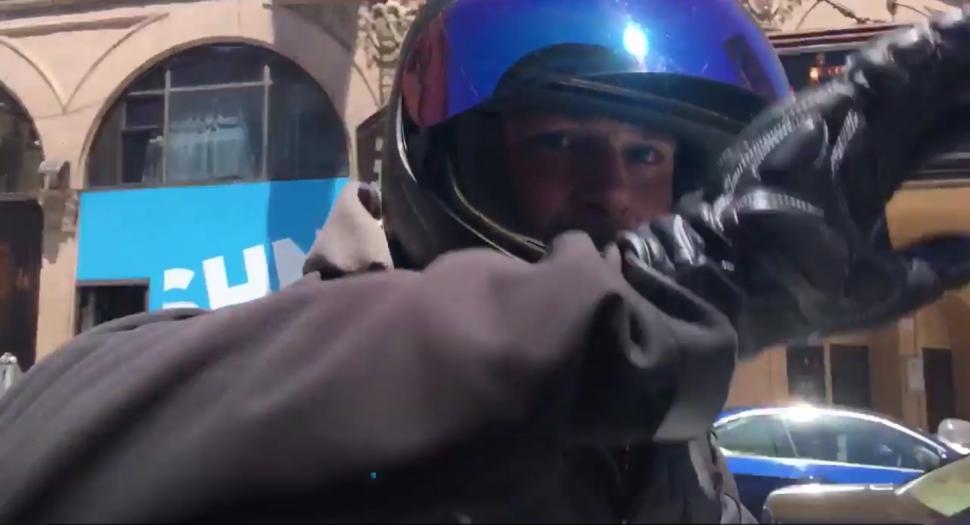 A cyclist in San Francisco was assaulted last week for trying to protect the sanctity of bike lanes in his city.

The victim of the assault, Randall Dietel, - or @R27D as he is known on Twitter - caught the incident on camera and uploaded the footage to Twitter. The incident took place on Golden Gate Avenue, a location that Dietel has recorded several videos of drivers illegally using the bike lane.

Dietel is not alone in the act of 'enforcing' the bike lane. He has retweeted several videos over the past weeks of other cyclists doing the same thing, some claiming that their reason for doing so was because the San Francisco Municipal Transportation Agency were not doing their jobs.

The overarching opinion amongst those cyclists is that there should be bollards placed along the outside of the bike lane to prevent drivers from illegally entering the bike lane.

Clearly, Dietel's actions weren't appreciated by all of the road users, as a motorcyclist took offense to the presence of a camera, smacking it out of Dietel's hand.

Dietel told CBS's local KPIX 5 news station that he called the police after being struck, but that it took an officer over an hour to attend the scene.

He also said that he would go to the local San Francisco Police Department to file a police report on the incident.

Tensions are high between cyclists and other road users in the Californian city following two fatal collisions between cars and cyclists on the city's streets in the last week.

One of those incidents, a hit-and-run, that killed a woman in her mid-40s, took place in Golden Gate Park, just three miles from the location of the assault on Dietel.

Among the city's cycling population there appears to be a growing mistrust of the authorities and the city's vehicle owners. This isn't the first time we've reported on trouble between cyclists and drivers - or cyclists and the police - in San Francisco on road.cc.

During the city's Critical Mass protest ride in September last year, one cyclist was filmed smashing the windscreen of car - while wearing a t-shirt that read "non-violence is our strength."

Also, a police officer was caught on camera knocking a cyclist off his bike, causing fractures and leg injuries, after pulling into a lane without looking in May.

In an interview with American broadcasting company CBS's local KPIX 5 news station, Dietel spoke about where he thought the city's priorities ought to be.

“I think what the city needs to be doing is focusing on making it safe for people who are eight to 80 to be able to cycle and get around in the city,” Dietel said.

“Drivers need to realize that 20 miles per hour is plenty fast enough and that most of the time if you are driving in downtown San Francisco, you’re on a 25 mile an hour street.

“There’s no sense in driving 45 miles an hour to get to the next red light.”