Mark Cavendish wins the first stage of the 2016 Tour de France, and here's his race bike...
by David Arthur @davearthur

Mark Cavendish might have his sights set on Olympic success, but he’s kicked off his Tour de France campaign in emphatic style, winning the opening stage and with it the yellow jersey, the first time in his career. Cavendish is riding for Dimension Data this season and that means a switch from Specialized to Canadian bike brand Cervélo, and he’s chosen the super fast S5, an aero bike fit for a sprinter. This isn’t his actual race bike, though, but a team leader like Cavendish has three spare bikes identically setup with the same equipment so they can swap between them in the case of a mechanical emergency. The frameset Cervélo’s latest S5, updated in 2014 and is, in case you didn’t know, a frame designed to provide optimum aerodynamics. Cavendish should be well used to the bike by now as he has been riding and racing this bike since switching to Dimension Data this season. Cav has optional Di2 sprint shifters fitted to the inside of the drops, allowing him to more easily change gear from the drops. A bit of bling comes in the shape of the gold KMC chain and red Ceramic Speed jockey wheels. Ceramic Speed also supplies the headset bearings. The Danish company claims they reduce resistance and are faster than regular steel bearings, but some people say the benefits on a bicycle are negligible.

- Ceramic bearings: the pros and cons Dimension Data is sponsored by Enve, and as well as the US company’s rims, it also uses the carbon fibre handlebars and stems. While Cavendish uses the carbon stem in a 120mm length, he prefers to use an aluminium PRO handlebar. You can clearly see the logo is taped over. We’re guessing that Cavendish either prefers the shape of the PRO handlebar or simply prefers to race with a metal handlebar, as quite a few riders do in the peloton. 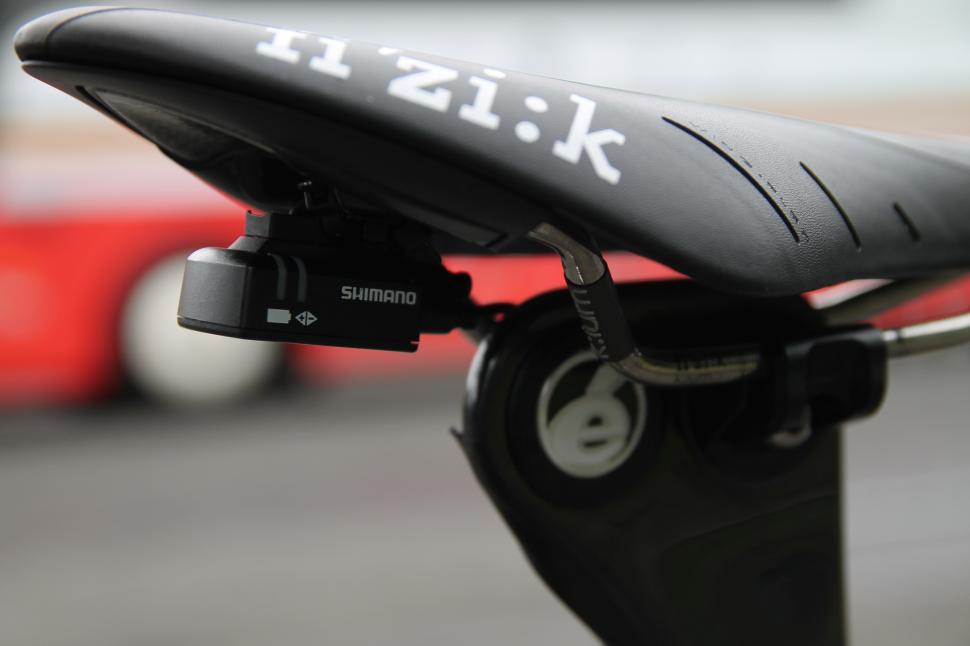 Other details include a Fizik Arione saddle with aluminium rails (not carbon, as you might reasonably expect on a pro bike), with the Shimano Di2 junction box attached to the rails so it’s well out of the airflow, Arundel carbon bottle cages and bold Lizard Skins bar tape. Cavendish is using Speedplay pedals this season, he has used Shimano SPD-SL pedals in the past. A Garmin out-front mount is bolted to the faceplate of the Enve stem. One final detail is the sticker carbon fibre effect tape on the chainstay, intended to protect the carbon and paint work from the chain slapping against it when riding over rough roads. The Dimension Data mechanics were fiercely busy during the Thursday morning when we visited, and bikes were still being built up. Here’s a partially assembled S5 that was just about to be built up. It was interesting to note that the team appeared not to be using box fresh frames but instead using old stock, we even spotted some frames still wearing the MTN-Qhubeka stickers from last season.