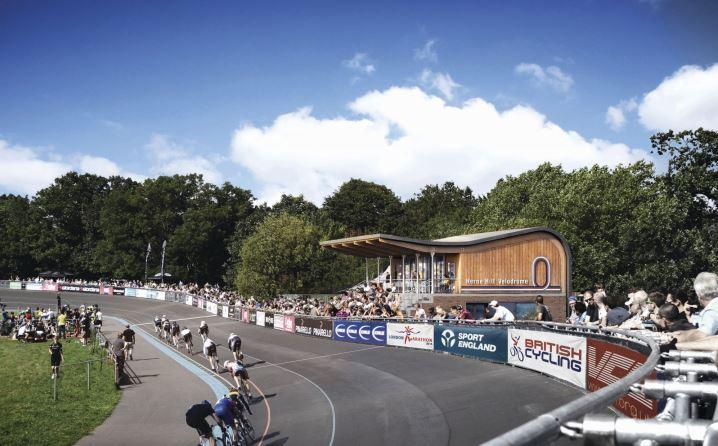 Work has begun on a new pavilion at Herne Hill Velodrome with hopes that the project will be completed during the first quarter of 2017. One of the oldest cycling tracks in Britain, Herne Hill is the last remaining finals venue from the 1948 London Olympics that is still in use.

BikeBiz reports that the new £1.8m pavilion has been made possible thanks to grants from Sport England, the London Marathon Trust and Southwark Council, plus £100,000 from the Mayor of London’s Sports Facilities Fund.

Work on the pavilion constitutes the third and final phase of regeneration. In 2011, £400,000 from British Cycling paid for resurfacing of the main track with an all-weather tarmac surface as well as the installation of new trackside fencing. Then, in 2013, funding from the Southwark Olympic Legacy Programme saw construction of a new junior track and multi-use game area inside the track as well as installation of track lighting to allow more use during winter months.

The latest work coincides with Herne Hill Velodrome’s 125th anniversary and a series of events has been planned throughout 2016 and 2017 to highlight the history of the venue.

“What better way to celebrate Herne Hill Velodrome’s 125th birthday this year by starting the final phase of our ambitious project to construct a new pavilion, which will safeguard cycling here for the next 99 years.

"We owe enormous thanks to the volunteers, the schools, the clubs, riders, land owners (The Dulwich Estate), lease holders (British Cycling) and of course our incredible funders: Sport England, The London Marathon Charitable Trust, Southwark Council, the Mayor of London and the project team for getting us this far.”

The pavilion plans were drawn up by Hopkins Architects – who also designed the London 2012 velodrome nicknamed ‘the Pringle’ – and were granted by Southwark Council around this time last year. Earlier plans were shelved due to concerns regarding the size of the building, the additional road access that would be required in what is a residential area, and the long-term sustainability of such a facility.

On completion of the new facility, the Herne Hill Velodrome Trust will take over day to day running of the track from British Cycling, working with the clubs that already support and use the venue.