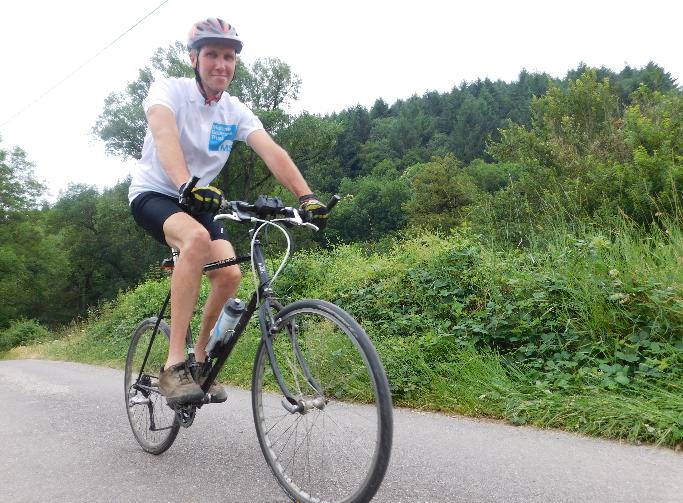 A cyclist with Multiple Sclerosis, whose brain damage means he cannot walk more than 500 metres, is to cycle from Wales to Southern France this summer.

Justin Kendell will take on the 2,200km ride over 5 weeks, leaving from Snowdonia next Saturday.

Justin, aged 45, said: "I have limited feeling in my legs, so I don't know where they are all the time. Even if they're a little bit tired, they have a life of their own, and that makes it very difficult to walk."

Justin had been a keen cyclist since his teenage years, but after his diagnosis in 2013 he thought he would never ride again.

He said: "Riding bikes had been my passion since I was a teenager living in Snowdonia.

"But I gave up riding soon after my diagnosis. It was my daughter, Sioned, who persuaded me to get back on my bike. I was full of doubt but she pushed me to try – and it was wonderful!

“It was amazing to be able to move and not feel like I was about to fall over at any moment. And I could ride where I couldn't walk anymore – and the trees, the birds and butterflies, they were all still there!

“I don't know if having ridden a bike for so many years meant I still have the muscle memory left to pedal, or it's just that the brain damage I have doesn't affect it. I can't explain it. My neurologist can't explain it. But I'm making the most of it!”

Justin will be riding from his teenage stomping ground of the mountains of Snowdonia to the
Pyrenees mountains close to his current home in Aveyron, southern France.

He leaves from the iconic Pen-y-Gwryd hotel, where the 1953 Everest team stayed during their training, on July 2.

22 day-long stages are planned, the longest covering 175km, the day with the most elevation involving 1,720m of uphill climb. Accompanying him will be his 18-year-old daughter, Sioned, and friend, Martin Hill.

"I can get to the point where I am pretty much completely paralysed from the waist down by the time I get off my bike, which can be quite startling for bystanders!" says Justin.

Justin is raising funds for the Multiple Sclerosis Trust, and hopes his ride will inspire others
with potentially life-impairing conditions to think about what they can do, rather than focusing
on the things they can't manage anymore.

"I'm really hoping that people will come and join in a bit of the ride," says Justin. "I'd love to meet some new people along the way, especially if there's some reason why they can't do everything they used to be able to too."

Multiple sclerosis is a condition which damages the insulating covers of nerve cells in the
brain and spinal cord, disrupting the ability of the nervous system to communicate with other
parts of the body.

"The disease affects everybody in different ways," says Justin. "I find it hard to balance and it affects my vision and co-ordination. How I can still ride a bike is a mystery to everyone! But training for the trip –I ride 300km every week –keeps me mentally and physically as strong as I can be.

“I love having a reason to get up in the morning, and a reason to keep training when my illness wants me to stop. And pushing myself gives me new opportunities to understand my symptoms, and finding ways to live with them more easily.”

Justin has raised £1,400 so far for his charity - to fund him or get in touch, click here.