Things have got worse for cyclists in Australia's "worst state for cycling" New South Wales, as police statistics show a surge in the number widely derided fines issued.

Compared with the same period - March to April - last year, the number of fines issued in the state has shot up 56% to 1545 in the space of a month.

The combination of these factors mean that police fines collected from people riding without helmets in New South Wales (NSW) alone totals A$350,262 (£172,113) between March and April, up from A$50,00 the year before, which makes for particularly poor reading for cyclists in the state.

The full picture of fines doesn't make the pill any easier to swallow either. While non-helmet related fines pale in comparison to those issued to cyclists in no or inappropriate headgear, the numbers of fines issued this year are consistently higher across the board, indicating something of a police crackdown.

This graph depicting the full story was pulled from the Sydney Morning Herald's coverage of the fines: 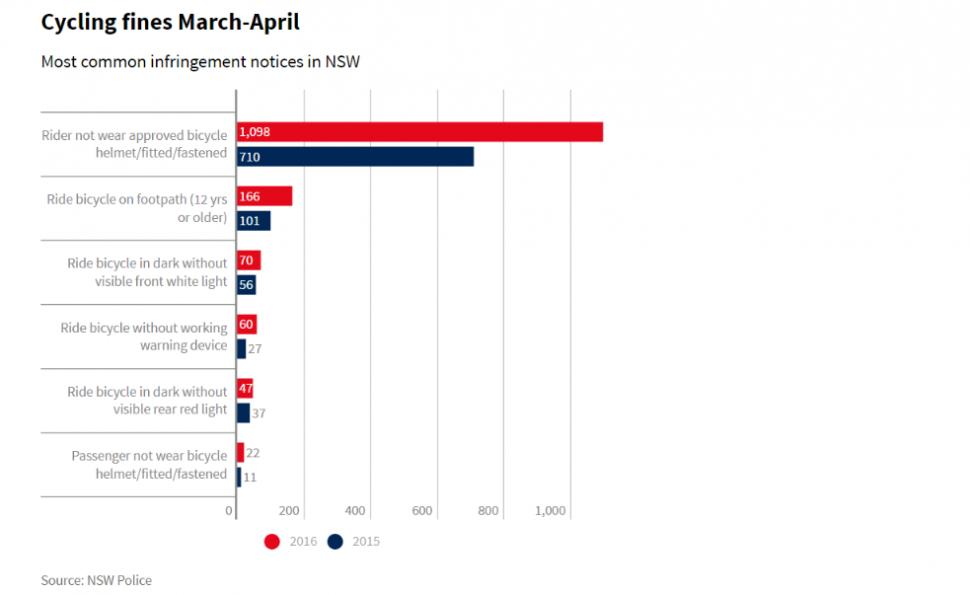 The silver lining to the fine hike announced in February was the introduction of a close-pass fine for motorists overtaking cyclists at a distance smaller than 1.5 meters.

Unfortunately this police crackdown does not appear to extend to drivers. In the space of time that 1,098 cyclists were fined for not wearing helmets, four drivers were find for overtaking too close to cyclists.

He said: "We agree that education is the best method but it has to be backed up by a reasonable level of compliance, which is fining people.

"[The number of motorists fined] does seem very low in proportion to the number of cycling fines issued in the same period."

Meanwhile in response to the backlash over the huge fines being given to cyclists, Roads Minister Duncan Gay said that the government "don't want cyclists' money," and that the increased quantity and cost of fines were "about improving safety."

He said: "We don't want cyclists' money – that is not why we increased fines for high-risk and downright stupid behaviour. These changes are about improving safety.

"I don't want to see another dollar in fine revenue but I do hope to see a reduction in cyclist injuries. It is simple: if you wear a helmet, you won't get fined."

However, claims from Green party transport spokeswoman Mehreen Faruqi suggested that the police have been "going on blitzes to rake in more revenue," and the government were without "any serious strategy" for investing in bike infrastructure.

All of this comes after Professor Chris Rissel of the University of Sydney, an opponent of compulsory helmet legislation, said the legal changes meant that NSW is "probably going to become the worst state in the world in terms of how we treat cyclists – if we’re not already.”

We reported more about what he had to say on the sorry state of NSW cycling, here.