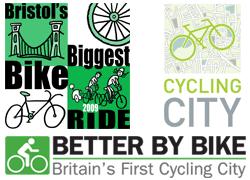 Comments follow visit to view new infrastructure, but what do YOU think?
by Simon_MacMichael

The Chairman of Cycling England, Philip Darnton, has hailed what he terms “a real sense of a cycling renaissance” in Bristol, the country’s first Cycling City, which he visited earlier this month.

Mr Darnton had gone to Bristol along with other representatives of Cycling England to see first-hand how Bristol and South Gloucestershire councils were working to increase the number of people cycling in the city, according to the website Bristol 247.com.

Together with his colleagues, Mr Darnton was taken on a five-mile tour – by bicycle, naturally – to see for themselves new infrastructure such as cycle paths in Ashton Court and Hotwells, a traffic system that gives cyclists priority on Prince Street Bridge and Bristol’s first 20mph zone in Bedminster and Southville.

Speaking afterwards, Mr Darnton said: “It’s easy to see why Greater Bristol was recently voted the UK’s number one city for cycling. The city and its neighbouring counties have a fantastic network of cycle paths and cycle-friendly streets, which are being enjoyed by ever-growing numbers of cyclists. There’s a real sense of a cycling renaissance in the city.”

He continued: “The new infrastructure projects we’ve seen today, as well as plans we’ve seen for the projects coming to fruition over the next few months, have demonstrated to us that Greater Bristol’s Cycling City project is on track for success.”

According to Councillor Jon Rogers, Bristol Executive Member for Cycling City, more bike-friendly projects are set to be unveiled over the next 12 months.

“We’ve seen some very successful new cycle paths open in the past 12 months,” he explained, “plus we’ve got a number of exciting projects coming in the year ahead. Long may Bristol’s investment in cycling continue.”

Greater Bristol was awarded Cycling City status in June 2008, bringing with it investment of almost £23 million for improving infrastructure and promoting cycling as a means of getting round in the city.

An update on progress of reaching the goal of doubling levels of cycling in some parts of the Greater Bristol area, published this month, is available on the Better By Bike website.

While Mr Darnton was clearly impressed with the progress being made, the Cycling City project has come under fire from the likes of the Green Bristol Blog.

We know that there are a good few road.cc readers who live and work in and around Bristol, and we’re really keen to hear your views on whether or not you feel Cycling City is a success and, if not, where improvements could be made, so let the comments begin!