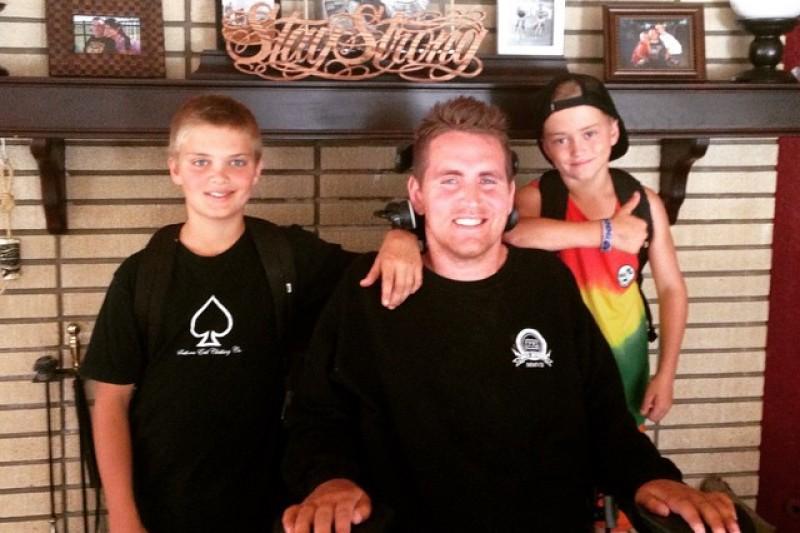 Murray was left paralysed after a 2007 fall
by Alex Bowden

A crowdfunding campaign has been launched to get former BMXer Stephen Murray back to the UK from the United States. Murray was left paralysed from the shoulders down when he broke his neck while attempting a double backflip in 2007. He is looking to raise £10,000 via gofundme.

Murray, now 36, moved to California at the age of 18 in the hope of becoming a professional BMX dirt jumper. While he fulfilled that dream, a crash at the Baltimore Dew Tour subsequently ended his career.

The father of two boys – Seth and Mason – Murray describes the costs of moving his family back to the UK as ‘enormous’. Compounding this, he says it will take up to two years receive full disability benefits as he has lived outside the UK for such a long time. Further costs come in the form of housing modifications for wheelchair accessibility, rehabilitation equipment and physiotherapy programmes.

Writing on the gofundme page, he said: “The last nine years have been incredibly financially draining on my family and the reality is that it is unsustainable for me to continue living in the US.  Additionally, in the last four months, I have suffered three severe bouts of hospital inducing pneumonia and I know that the best place of care for Seth, Mason and myself is back home in England with my family.”

1
"Ditch the saddlebag": Dib Sports launch 2-in-1 hydration and storage bottle
2
Edinburgh cyclist aiming to become the fastest woman to ride around the world
3
Hit and run driver who killed cyclist “did not look properly or at all”
4
Bontrager unveils Elite road pedals
5
Five cool things coming soon from Muc-Off, Pro, Dawes, MET and Soma
6
Updated: “A complete joke” – MP savages Boris Johnson’s cycling plans as he confirms no investment beyond £350 million manifesto pledge
7
Near Miss of the Day 373: Chief Constable agrees it was a close pass – but his police force was unable to act because of way footage was submitted
8
RideLon-doh! Data breach probe as acceptance letters sent to wrong recipients