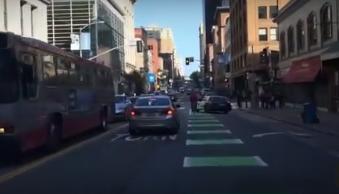 Pulling out without looking is never a good idea, particularly if you're a cop.....
by Sarah Barth

A video has emerged of a police car hitting a cyclist in a bike lane in San Francisco.

As the rider makes his way down a green painted cycle lane, the police car pulls out without looking and knocks him down.

The video was captured this week by an Uber driver, who was on the scene at Second and Mission streets.

Police have begun an internal investigation into the incident, in which the cyclist Tim Doyle received fractures and a leg injury.

Doyle wrote online: “I got hit by a SFPD car at 5:45pm at 2nd and Mission. At Least I got hit by a cop who didn’t try to flee. He called an ambulance for me. But I did see that a bit of a lie trying to be put into the report that the lights and siren were on. Not true. The cop car was in a parking space alongside 2nd street and without looking or seeing me just pulled out into my lane as I was doing 25mph and I t-boned the cop car. I flew 15 feet through the air and landed flat on my back. Spent 10 hours in the SFGH Emergency Department and was discharged with a few cracked bones and a gnarly right leg wound.”

“He’s shaken up in severe pain,” Cassidy said. “Sound like he’s on the road to recovery though.”

A police spokesperson said the officers involved would not be able to drive while the incident was being investigated.

Just last month we reported how CCTV showed that New York Police drove into a cyclist in an unmarked car, and then lied about it, according to the rider.

Security camera footage appears to show how, when an NYPD officer hit Brooklyn resident Ross Cunningham on April 5th, making a right turn without indicating in front of him, the cyclist got to his feet to come eye to eye with NYPD Sergeant Peter Villahoz.

The cyclist said he was offered an apology and an ambulance by Villahoz, although the driver was in fact Officer Kenneth Maslowski.

But Villahoz also asked the cyclist 'Why were you riding on the sidewalk?’, according to The Gothamist.

Mr Cunningham told The Gothamist: ”[It] is a completely insane thing because how would a car hit me if I was riding on the sidewalk?"

But his bike was damaged beyond repair and his phone screen was cracked.

When Villahoz asked, "What would you like me to do?” Cunningham replied "I'd like you to pay for it."

When a police report of the incident arrived in the post, Mr Cunningham said it was a false account of the incident , and intended to shift the blame away from the officers, saying the police car "was making a legal right turn with emergency lights when cyclist struck right side of vehicle."

But in the CCTV, no emergency lights can be seen when the cyclist is hit at 20 seconds in: