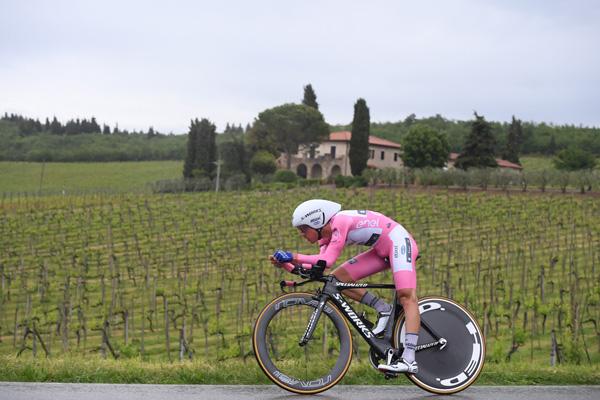 Gianluca Brambilla of Etixx Quick Step has held on to the lead of the 99th Giro d'Italia following a rain soaked individual time trial through Tuscany's Chianti Classico vineyards, won by Primoz Roglic of LottonNL-Jumbo.

The Russian had seemed to be heading into the pink jersey until a mechanical issue and two crashes - one on the final corner - cost him significant time.

Brambilla leads the race by just 1 second from his Etixx-Quick Step team mate Bob Jungels, who remains leader of the young riders's classification.

Following the 40.5km stage, Roglic said: "After approximately ten kilometres, I lost my computer and my bottle. I indicated to my sport director to pick my computer but I'm not sure if he understood what I was telling him. I also lost motivation and I decided to take it easy.

"But I was feeling fantastic uphill so I just pushed and pushed for the fun of it. I was really slow and unlucky at the beginning but very fast and lucky at the end because I only felt a drop or two while the riders after me got the pouring rain. This is strange, very strange".

Brambilla, winner of Saturday's stage 8, said: "Yesterday I expended a lot of of energy in the breakaway. I attacked and I went full gas all day. It was the same today: alone again, full gas again and nothing to lose. Everything went well. I kept the Maglia Rosa. Until now everything has gone well in the Giro. It's an amazing feeling".