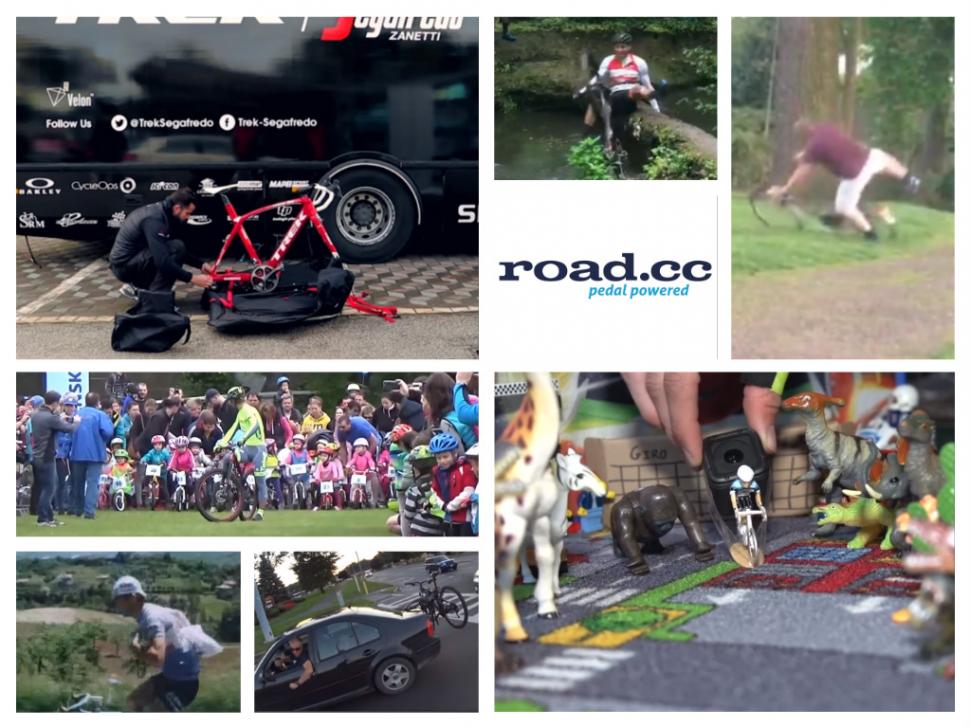 Speculation aside, it's easy for us to joke about drug-influenced creative streaks, but it seems that the guys over at Orica GreenEdge in our opening video are just having a good time.

There's loads more for you to spend your afternoon watching in today's round-up, so we'll stop waffling and let you tuck-in.

What are they smoking over at Orica GreenEdge?

We all love a good highlights package, right? How about one that looks like it's come straight out of the imagination of a drug-addled teenager?

We're not suggesting the folks over at Orica GreenEdge are drug addled or teenagers, by the way...

It's just a joke.

The driver in this video passes under one of the most decorated junctions we've ever seen (seriously what's going on with all that signage?) and confronts our camera wearing cyclist, apparently because he'd "kill him on the trails."

It's worth noting that our antagonist is carrying a supposedly very expensive carbon mountainbike on the rack of his car.

To continue the proverbial pissing contest, our camera wielder feels the need to announce that he owns a $6500 road bike in the video description.

Feels like a whole lot of overcompensation going on to us.

Following his ill-fated return to mountain bike racing last month, it seems Peter Sagan has decided to tone down the level of his competition.

Here he is racing against 5-year old girls.

This event is actually a part of the Detska Tour Peter Sagan, a mountain bike event in his home country of Slovakia.

Ever had one beer too many and struggled to ride home from the pub?

Ever had so many that you haven't even been able to get on your bike?

He got a bit wet.

On the topic of cyclocross, here's a preview of one of the CX events we're most excited about.

We reported on the Battle in the Bowl when it was announced back in March, and now we've got video footage of what to expect, we're a little more excited now.

Entry is still open if you're keen to get involved!

We know you're knee deep in Giro stuff at the moment, but it's always nice to take a glance back at how things were.

Here's a clip from The Greatest Show on Earth, that follow's the 1974 Giro d'Italia, which Merckx won by 12 seconds.

Imagine seeing cyclists popping into shops to get fizzy drinks to keep their team mates topped up these days?

Marginal gains, and all that.

Finally, we've got the first two installments of the 2016 World Bike Packing Championships.

This is an annual competition run by Scicon bags,  an Italian bike bag manufacturer, which gives World Tour team mechanics the chance to pit their packing abilities against one another.

Below are the first two entries of this year's competition: Trek-Segafredo and AG2R La Mondiale.