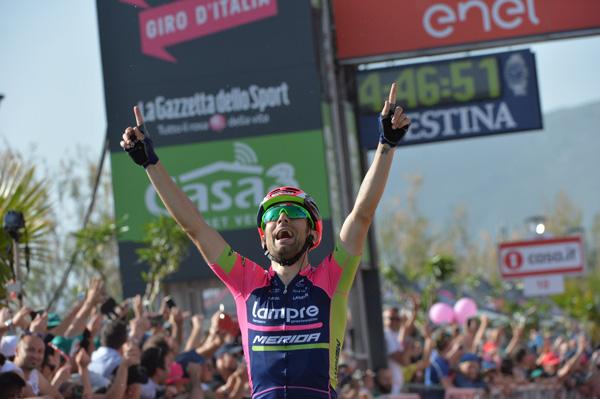 Diego Ulissi of Lampre-Merida has taken the fifth Giro d'Italia stage win of his career as the race returned to Italian soil following the weekend's Big Start in the Netherlands.

Giant-Alpecin's Tom Dumoulin was the first rider home from a small chasing group containing most of the riders expected to contest the overall victory.

In finishing second, the Dutch rider gets back into the race leader's pink jersey that Etixx-Quick Step's Marcel Kittel took from him in Arnhem on Sunday.

He has a 20 second lead at the top of the general classification over Kittel's team mate, Bob Jungels.

The 26-year-old Ulissi's win on today's 200 kilometre Stage 4 from Catanzaro to Praia a Mare was reward for an attacking performance from his team throughout the day, with the parcours punctuated by some relatively short yet tough climbs.

It was on the last of those, crested 8.5 kilometres out and with a gradient reaching 18 per cent, that Ulissi made his winning move and he held on to take the win.

"I’m extremely happy," said Ulissi. "My victory comes after enormous team work. Valerio Conti managed to create the small group and I rode away knowing that, on the final descent, the peloton of chasers would go even faster than me. I gave it everything I had. It’s a huge emotion."

Dumoulin reflected: "It’s great to get the Maglia Rosa back. That’s what we were working for today. We sent Georg Preidler into the last breakaway. It would have been perfect if he had taken the race lead but it wasn’t to be. At the last gasp, I tried for the stage win but Ulissi was just too strong."

Among those missing from the chasing group that finished 6 seconds behind Ulissi was 2012 Giro d'Italia champion Ryder Hesjedal of Trek-Segafredo, who lost more than half a minute on his rivals for the overall.