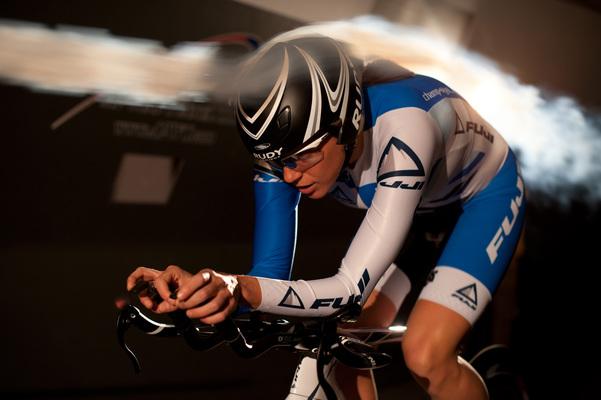 Want to go faster? Get a motorbike to follow 10 inches behind you say researchers

Aside from the obvious motivation of not wanting to be flattened by a clearly deranged motorcyclist, it seems there are aerodynamic benefits too. Research at TU Eindhoven, KU Leuven and the University of Liege has shown that a motorbike travelling right behind a racing cyclist can reduce the air resistance for that cyclist by almost nine per cent.

Phys.org reports that as well as computer models, researchers deployed scale models of a time trial rider and a motorcyclist in a wind tunnel to make their calculations.

They found that a motorcycle 25cm behind the cyclist would cut air resistance by almost nine per cent and that if there were three motorcycles, the reduction could be as much as 14 per cent. (They don’t explain what the cyclist in question might have done to justify having such a squadron bearing down on them.)

The study also modelled some slightly less terrifying gaps and found that a motorbike riding as much as five metres behind the cyclist would still have an impact. In fact, over 60km the benefit would amount to around nine seconds – a significant amount considering the tight margins in professional racing.

Although the benefits of riding behind someone else are far more significant, it has long been known that having someone in your wake can be beneficial too. The researchers say that the new evidence suggests the effect is much greater than previously thought and they have therefore advised the UCI (International Cycling Union) to extend the minimum distance between motorcycle and cyclist during a time trial from 10m to 30m. Researchers did however note that compliance with recommended distances is something that almost never happens in reality.

The recommendation also comes amid calls for greater safety measures to regulate the presence of motorbikes in bike races. A number of riders have been involved in collisions with race motorbikes in recent times, most notably Antoine Demoitié who died in hospital following a crash during this year’s Gent-Wevelgem.