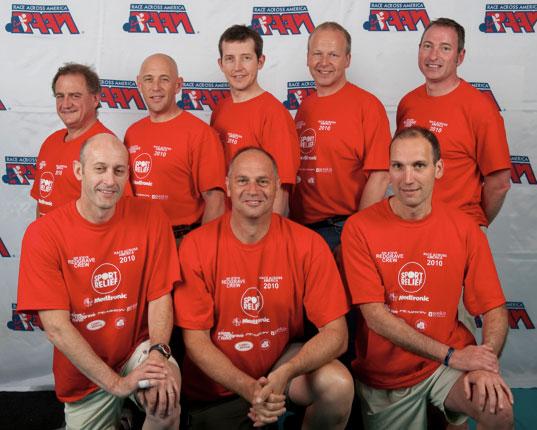 Scenery, spills and soloists all in the Redgrave Crew's sights.....
by dave atkinson

As the RAAM enters its second week for the men and the teams find themselves well over half way the hurt is really setting in. No surprise that some riders have found the going too much, sadly we have to report that veteran Paul Carpenter, the only UK soloist, is a DNF, abandoning at Time Stage 28 after almost 1600 miles.

The tweets of the Sir Steve Redgrave Crew (http://twitter.com/redgravecrew) give some insight into what it's like on the road too. "Met a solo rider after TS27 no834 looked to be suffering we gave him a big cheer. Respect" reads one. There is no 834 so we're assuming it's rider 384 – Canadian Eric Dufour – that was spotted and he'll certainly be feeling it as last solo man on the road; so far five of the 18-strong field have called it a day.

"closing in on wichita after a tumble across rail tracks just after half way...ouch", reads another. We're not sure who it was that took the tumble. Others paint a picture of the terrain; while Arizona and Colorado were described as having great scenery – "Real wow factor at sunrise this a.m. Surrounded by red rock of monument valley" – the latest tweet reads, "Missouri hot, humid, hilly but at least its not kansas where there is nothing but straight road & grain elevators".

You can also follow the Redgrave Crew live thanks to Land Rover. there's an interactive map at www.interactivelandrover.com which updates the team's position in real time, as we write they've just past Jefferson City and are rolling through Missouri on their way to St Louis.

The battle between the two UK-based eight-man teams – the aforementioned Sir Steve Redgrave Crew and Convicts of the road – continues, with the latter 50 miles up the road in third place but with seemingly little hope of catching the two American crews occupying the other podium places. In the four man competition Sharp4Prostate and RAF Survitec Epic have both suffered in the last day, dropping a place each. they're now fourth and sixth, separated on the road by 50 miles and the German Commerzbank Hamburg team. Velocity Bikes are still plugging away in the two man category, with 1389 miles covered at an average of 15.15mph