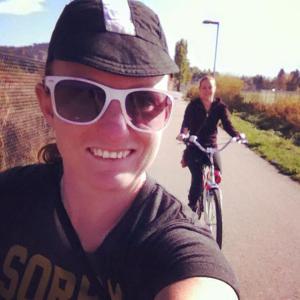 “Sydney is weird, there is a general hatred for cyclists”

Competitive cyclist documents the demise of her love for cycling - thanks to NSW's attitude...
by Sarah Barth

A experienced competitive cyclist in Sydney has written an open letter to the city, saying its aggressive approach to cyclists has left her near breaking point.

Lizanne Wilmot, a UCI ranked track Sprinter, writes a blog about using a bike for ordinary journeys, but says ‘a series of incidents has broken my commuter spirit.’

She writes on her blog: “When I first started riding in Sydney 10 years ago, it was scary. Busses were my biggest concern, they seemed to pass with millimetres to spare. And cars, although careless and usually unaware of my presence, were not on a war path to see me off the streets.

“In the last 10 years, I have seen a lot of change. Numbers of cyclists have increased, cycleways have been built, new laws for my safety and protection have been put in place. But now, even more than never, I feel more vulnerable and fragile every time I ride.”

The cyclist, who doesn’t own a driving licence, but says she has learned the rules of the road, says that for her, cycling is a way to save money, get to places faster, and keep fit, but that “Sydney is weird, there is a general hatred for cyclists.”

She adds: “There seems to be a culture where everyone is that tightly wound and set in their ways, no one wants to give an inch of ground and the result is a simmering tension that is sitting at a rapid boil.”

She notes a few recent incidents that have given her a cause for so much concern.

In one, she said she was punched by a pedestrian as she passed him.

She wrote: “I stopped and angry said ‘you just f’en punched me! Why would you hit a girl?!!’ And he escalated it to how he would not respect me until I got a license and paid road tax.

“A few more expletives and he wished I would get hit by a car and die. It was a rapid escalation to a situation I needed to leave.

“This was a low point for me and cycling.  As I sat on the side of the path in tears talking to the cops, not one person asked if I was OK.”

Another incident happened on a new commute to work.

She wrote: “One road in particular is uphill with a red light at the top. It is 1 lane, with cars parked on one side and a curb and gardens on the other. In the morning people are getting into said parked cars and flinging doors open.

“It is also not possible for me to ride in the door zone and a car pass me with 1m space. So, I take the lane. I do not do this to piss people off, I do this because I’m scared and I want to save myself from an accident.

“Then one day, this car was revving behind me. So I moved further into the lane to let them know I didn’t feel safe. At this point the car moved right inched closer, and hit me from behind while blasting me with the horn.

“It wasn’t enough to knock me off, but it was enough for me to wobble and move out of the way.  100m later at the red light I knocked on the window to ask ‘what gives’ I got a mouth full about how I always hold her up on her way to work and I needed to share the road and move out of the way. She said she wouldn’t have hit me if I shared the road.
“The cops were called again, they had a chat with her, and in the follow up I was advised that she was now aware of the law (although grumpy that she was at fault).”

The worst of all, though, was when she was hit by a truck.

She said: “I was cycling along one of the cycle friendly back streets bright clothing, reflectors, lights (and my bell) indicating I was turning right round a round about, when a truck failed to see me, I couldn’t stop fast enough, so I decked the bike and thank god, ended up between the wheels, under the truck.

“I saw the truck before the incident.  I saw him slowing down, I though that was he saw me.  In reality he was slowing for the turn, and was accelerating through the roundabout before he realized I was there.  He said he didn’t see me.”

Just a week ago we reported how some residents of New South Wales (NSW), Australia, are selling their bikes and telling visitors not to cycle because “if it’s not the abuse from drivers it’s the fines” that make cycling too risky a prospect.

Fines for cyclists increased by up to 500% on 2 March, for misdemeanours such as not wearing a helmet (A$319), not carrying a bell (A$100), and ‘dangerous driving’ in a bid by Minister for Roads, Duncan Gay, to crack down on supposed dangerous cycling among anyone aged 12 and over.

Although the fines were, according to Gay, supposed to improve safety of people on bikes, academics believe it will make NSW the “worst state in the world” for cyclists.

One Sydney student who decided to sell her bike, said she couldn’t afford the risk of a fine, which would force her to choose between eating and paying up.

Natalie Synnott told ABC she preferred to ride on footpaths for safety reasons but was afraid of getting caught and fined, which would be a financial disaster for her: "I just know that I will get fined because I have terrible luck," she said.

Adrian Plius, a Sydney bar manager, sold his bike because he didn’t want to risk a $300-$500 fine for a 10 minute commute. He walks now instead.

He said: "A 10 minute ride has turned into a 40 minute walk so it definitely has changed my lifestyle.

“I don't mind walking but it is a bit sad not to have the option in a major international metropolitan city, to be scared to ride your bike for both financial and safety reasons”.