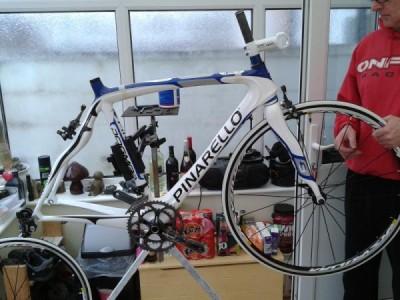 In the most in-depth analysis of the nature, extent and impact of counterfeiting on the bicycle industry we’ve seen to date, UK-based trade publication BikeBiz has published a series of articles called Faking It that look at the issue from a variety of angles.

While BikeBiz’s audience is primarily within the industry, the series of articles – handily available also as an individual PDF, Word document or e-book – is also essential reading for anyone thinking of buying (or who has perhaps already bought) a ‘Chinarello’ frameset, a pair of ‘Faukley’ sunglasses or some other knock-off.

Themes include why people buy items they know or suspect to be counterfeit in the first place, where fake items originate and how they are distributed, safety implications and the efforts brands are making in combating the fakers.

Taken together, the series of articles is a fascinating read, and helps dispel some myths – one of them being whether, as many assume, a ‘Chinarello’ frameset made in the same factory as an original Pinarello.

The amount of time and money some brands are putting into protecting their intellectual property is also an eye-opener, and again and again a comparison is made with the fairground game whack-a-mole – the moment you shut down one online seller, they pop up elsewhere.

Another common theme lies in the motivation for people buying fakes and thereby providing the counterfeiters with their market – with the biggest reason being that there is a belief among some that some brands, with the prices they charge, are ripping off the consumer.

That same consumer, of course, isn’t deterred from buying a fake product which may give others the impression that he or she has bought from that brand – albeit one that could be made from inferior and in some cases dangerous materials).

But what they won’t have done there is contributed towards the costs of research and development or marketing or other aspects that make the brand desirable in the first place (nor indeed to the expense of it protecting its trademarks and copyright).

And they won't benefit from after-sales service, or being able to seek legal redress should something go wrong - in all probability the vendor will have disappeared, at least in that form.

That relates to products bought from China at a too good to be true price, but there  are also consumers who believe they are actually buying a genuine product, from eBay in the UK, for example, but unwittingly end up with a counterfeit one.

We regularly see forum postings on road.cc from people who have bought or are thinking about buying a frameset from China – back in 2012 for example, site user Wheelz bought a ‘Pinarello’ frameset and sought advice on how to build it up (that’s the bike being put together in the picture above).

He was up front about knowing it was not the real deal and that he would tell riding colleagues where he had sourced it from ... although at the same time, of course, to a casual observer, the bike is branded Pinarello (which leads to a whole new discussion of why you’d want to give people that impression),

BikeBiz’s investigation, conducted by executive editor Carlton Reid, underlines that when it comes to counterfeiting not everything is black and white, whether in terms of safety, or cheap versus expensive prices and that in reality the situation is more nuanced.

Head here to get started – where you will also find links to each article as well as to download them all collectively as a PDF, a Kindle file, an eBook or a Word document.