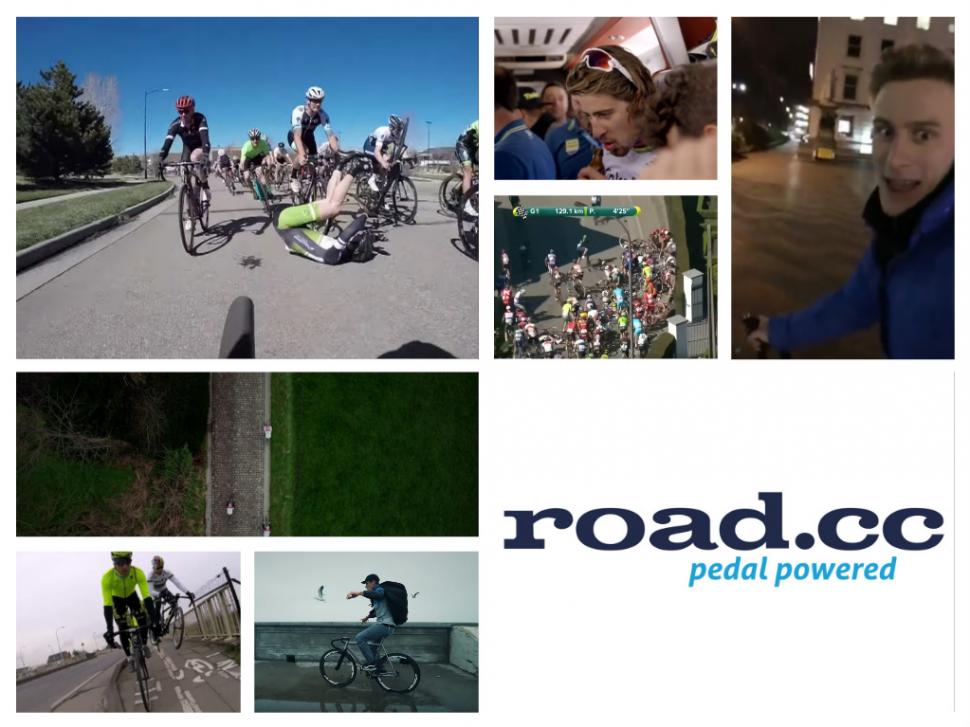 A drunk cyclist takes us on an adventure around Birmingham in today's crash-heavy video round-up + bonus Sagan...
by Elliot Johnston

We've all been there: pedaling home after a night out a little worse for wear. Not all of us have decided half way home that we don't want the night to end and started on an epic drunken cycling adventure.

That's where we start today's video round-up; on a particularly hilarious and brilliantly wobbly tour of Birmingham city centre.

Our protagonist — Zwardellion on YouTube — filmed his evening on video-sharing social network Snapchat, and uploaded the result to YouTube. It's brilliant, and horribly reminiscent of one or two of our own experiences on two wheels here at road.cc.

We move on from misadventures in Birmingham to crashes in a criterium race in Louisville, Colorado, and crashes in Flanders, Belgium.

We stay in Belgium for some post-race celebration with our favourite maverick world champion, Peter Sagan, plus some bonus training ride antics from the champ himself.

Finally, we step into a time machine and take a look at Phil Liggett's coverage of the 1988 Paris-Roubaix, and close with a far more technical and significantly less alcohol-fuelled cycling adventure, this time around Los Angeles.

What a ride. There's not really much we can add to this rollercoaster adventure, other than that we kind of wish we were there.

If there's one thing that's certain, it's that — despite Zwardellion questioning what he's doing with his life — we think he made completely the right choice to head out on his own on that fateful night.

Across the pond now to a Kansas-based criterium that featured a particularly amazing bit of bike handling skill amid a pile of tangled humans and bikes.

Velonews writer Spencer Powlison was the cyclist in question. He was taking part in the crit to test the Specialized Allez Sprint that he puts down as the reason he managed to escape the crash unharmed.

As we see it, it was Powlison's insane flexibility and mid-crash malleability that took him out of harms way. Bravo!

Tour of Flanders 2016 highlights and crashes

In case you missed it, the Tour of Flanders was also particularly crash-y over the weekend. The first half of the race saw a number of riders fall down, some pretty big pile ups, team cars hitting riders, and even the incredible incident that saw an Etixx-Quick-Step team car run over a Giant Alpecin mechanic.

If you're only interested in those incidents you won't want to watch much past the first minute and a half of the Cycling Tips highlight show, however, if you want to see how maverick world champion Peter Sagan claimed victory, keep watching.

Before we show you how the main man Peter Sagan celebrated the victory, you should check out IAM Cycling's full Cobble Season preview — you might have caught a bit of it at the start of the Cycling Tips video above.

It's a stunning embodiment of the emotions of the Spring Classics, and captures the atmosphere brilliantly.

Peter Sagan celebrates with two beers... at once

How would you celebrate winning the Tour of Flanders?

Beer? Sure. Belgian beer? Of course.

How about two Belgian beers at the same time? Well, Mr Sagan doesn't do things by halves.

Even if you are dead serious, you can enjoy what you do. At least @petosagan did duringTuesday's training ridehttps://t.co/mwkxJ43DUR

You don't need Belgian booze to have a good time with Peter Sagan, and you don't need to remind his Tinkoff team mates about that.

Here he is on a training ride putting a smile on everyone's face.

We do wonder whether his team mates get tired of the constant clowning around, though.

We're pretty sure if you had watched Phil Liggett's Paris-Roubaix coverage back then, you wouldn't have forgotten his trench coat.

Ripping around LA streets on a fixie

We finish today's video round-up on a similar note to the one we started on.

Wonder and adventure don't have to go hand in hand with alcohol fuelled comedy — although it clearly makes terrific video round-up fodder — this little adventure covers some beautiful Los Angeles city streets on a fixie.

The cyclist you see is cycle courier-turned-racer from San Francisco, Chas Christiansen, who's modelling Oakley glasses and flying around the city on a pretty sexy-looking fixie.