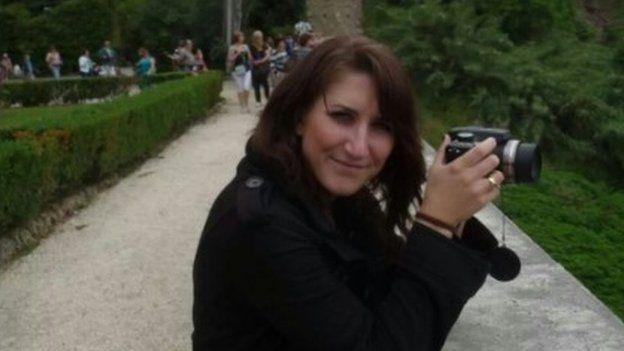 The mother of a cyclist killed in a collision with a skip lorry at Ludgate Circus in the City of London say her family are “devastated” after a jury today cleared the driver of the vehicle from causing her death by careless driving. She added that she hoped her daughter’s death would make people “think twice before cycling in London.”

Janina Gehlau, aged 26, a postgraduate student from Germany on a three-month unpaid internship in London, died in hospital in October 2014 three days after she was hit by the left-turning truck at the junction of Ludgate Circus and Farringdon Road.

Her husband Marcel Gehlau said after her death that she had bought a bicycle second hand so she could visit art galleries and museums since she was unable to afford the fares to use public transport.

He broke down and cried at the Old Bailey today after lorry driver Vincent Doyle, 45, who had been charged with causing Mrs Gehlau’s death by careless driving, was acquitted by the jury, reports the Guardian.

Judge Gerald Gordon said: “I would like it to be made absolutely clear to the family that the verdict of the jury does not imply any form of criticism of [Mrs] Gehlau.”

But he added that “a factor” in her death may have been a difference in traffic laws between UK and Germany, where – as the prosecution noted during the three-day trial – a cyclist in similar circumstances would have right of way.

According to an Evening Standard report, the prosecution had said Mr Doyle should have seen the cyclist, who was using the cycle lane to the left of the carriageway as she approached the bike box at the junction, in his vehicle’s mirrors for between 3 and 5 seconds.

The traffic light at the junction also had a Trixie mirror, designed to help drivers of large vehicles see what is happening in their blind spots. The vehicle had an audible warning that it was going to turn left.

The driver had initially told police that he had not stopped at the junction, but after being shown CCTV footage agreed that he had been stationary there for 23 seconds.

The court was told that Mr Doyle’s first reaction on getting out of the cab according to witnesses was to say, “Oh my God, You stupid girl, didn't you hear I was turning left?"

Explaining why he had used those words, he said: "At first I was angry. I thought: 'What is that stupid person doing?'

"Then, as I got close and I got down beside the girl, I realised how serious her injuries were.

"I was trying to keep her alive until the ambulance got there. I was holding her hand. I was feeling her pulse. I was shouting 'hang on, hang on'. I was pleading with her."

Allison Hunter, prosecuting, told the defendant that he was "telling one lie after another" in is account of the crash.

"If you were not aware of that Trixie mirror, it's a symptom of your carelessness,” she insisted. “That is an example of how careless and inattentive you were on October 17."

But Mr Doyle, whom the court heard spent eight weeks in a psychiatric hospital last year following a nervous breakdown, maintained: "There was no carelessness. I'm a careful driver and she was not in my mirrors."

After he was cleared today, Mrs Gehlau’s mother Andrea Tasic issued a statement on behalf of her family, reported by the Evening Standard’s Ross Lydall, in which she said: “We are devastated by the verdict and do not feel that we have got justice for Janina.

“We would like to thank the emergency services who tried so hard to save her and everyone who has supported us since her death.

“I miss her so much. She had a great future ahead of her and it was erased in a moment.”

A number of cyclists who have lost their lives in the capital in recent years have been foreign nationals, some of whom had only been in the city for a short time.

In part, the number of foreign victims may reflect London’s status as a world city that attracts young people from around the world to work or study there.

But Mrs Gehlau’s mother said that her impression of the city was that it was not safe to ride a bike on its streets.

She said: “I told her I thought the roads were too dangerous when I visited her, but she was an experienced cyclist and told me not to worry, she said it would be fine.

“My only hope is that this makes people think twice before cycling in London,” she continued.

“Too many families are losing loved ones in these circumstances and action needs to be taken to improve safety before there are any more tragedies.”

Solicitors Slater & Gordon are representing the family in a civil action.

Matthew Claxson, a lawyer at the firm, said: "When cyclists and heavy goods vehicles have to share the roads in such close proximity, all too often there are tragic consequences.

“This terrible incident again highlights the need for action to be taken to reduce the risks faced by vulnerable road users on our city’s streets.”

Mrs Gehlau’s death happened six months after another cyclist, Spanish national Victor Rodriguez, was killed at the same crossroads, which is on the route of the North-South Cycle Superhighway currently being built from King’s Cross to Elephant & Castle.

In December last year, lorry driver John Green was convicted of causing Mr Rodriguez’s death through careless driving. He was given a 12-month driving ban and ordered to carry out 150 hours of unpaid work.