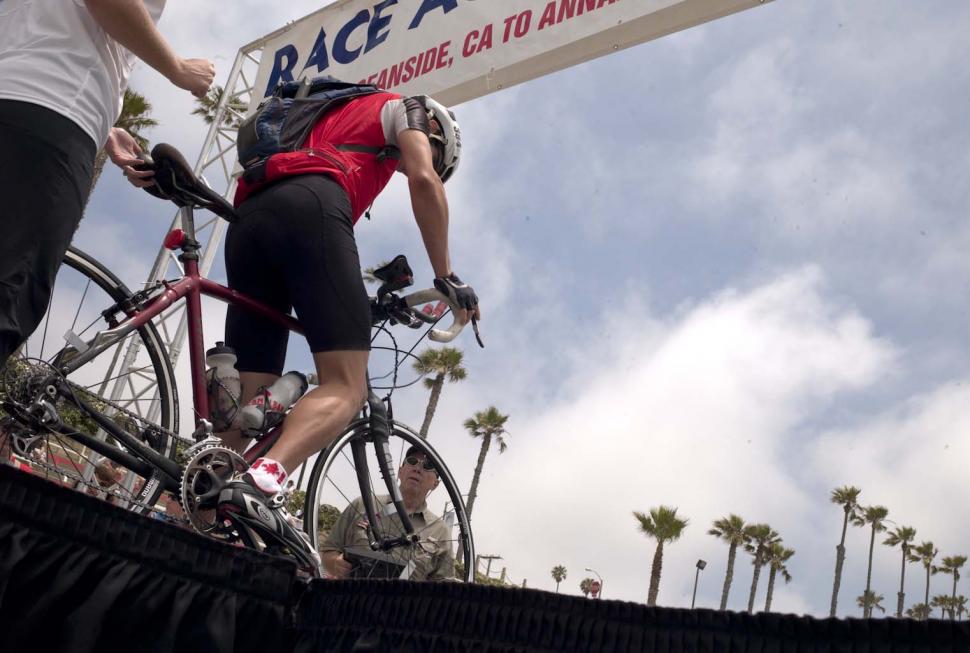 Race Across America 2010 rolls out

Solo riders on the road, teams starting on Saturday
by dave atkinson

Yesterday saw the men's start of the Race Across America, generally acclaimed as the world's toughest bike race. Essentially a 3,000 mile time trial from the Oceanside on the Pacific coast to Annapolis on the Atlantic across the heart of the United States. The RAAM can be ridden as a team but really it's all about the solo riders: these guys and gals will be spending at least the next 8 days in the saddle, many of them still won't have been off the bike at all since the race began. The women have been out on the road since Tuesday.

UK interest in the solo events is limited to Paul Carpenter, who's currently running third in the men's vets, but there's plenty of UK teams out on the road with Velocity bikes competing the pairs event, and Convicts of the Road heading up the 8-man leaderboard which also includes the Sir Steve Redgrave Crew. Two four-man teams – Team Sharp4Prostate and Team RAF Survitec Epic – will also be in the mix.

The start of the solo racing has been fairly low key, according to the organisers, and most of the early racing has passed without incident. The leading women have passed time station 8 at 482 miles, and currently there's about half an hour between leader Michele Santilhano (RSA) and second placed Barbara Buatois (FRA) on the road. The men's race is currently led by Tony O'Keeffe (CAN) who passed the 282-mile time station 4 after 11 hours and 14 minutes; that's an average of over 25mph. RAAM legend Jure Robic (SLO), a four-time winner, is in second, and Gerhard Gulewicz (AUT) is running third.

Possibly the most interesting story of the early stages is that of Terry Lansdell (USA) who's competing in the shorter Race Across the West (RAW) which finishes in Durango, Colorado. Terry is aiming to set a new record for fixed gear time trialling, but his plans were thrown into disarray on the drive to the start when his entire fleet of bikes came loose from the roof of their hire van and ended up beneath the wheels of a following car. However, a bike shop in Augusta came to Terry's rescue and he's now out on the road in third place in the RAW, aiming to break the fixed TT distance record on a bike he'd never ridden before the start of the race.

"It's tough for me to ask for help, in my regular life or on a bike", Terry said when interviewed from the saddle. "There's no words that can express thanks enough. The only thing I can do to say thank you is to get to Durango and try to set this record on a bike I've never ridden before".

The chaps at RAAM are putting together a daily recap that's available both on the RAAM site and on YouTube. We've embedded it below.