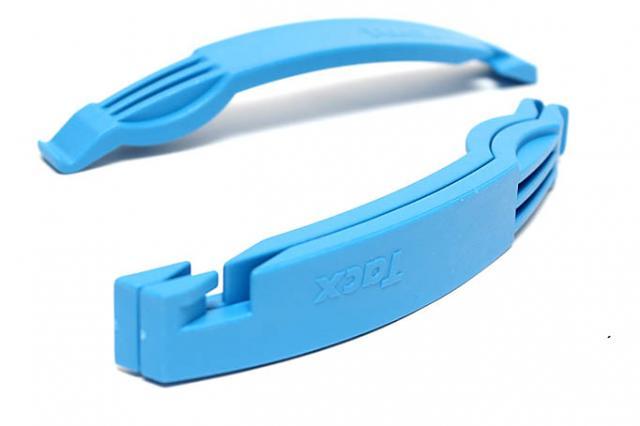 Cyclists save collapsed man's life - with help of tyre lever

Riders sprang into action after seeing pedestrian fall, with one giving CPR while others directed traffic
by Simon_MacMichael

A group of cyclists have been credited with saving the life of a Surrey man whom they saw collapse while he was walking, with one using a tyre lever to remove a blockage from his windpipe and others administering first aid including CPR and directing traffic away from him.

Get Surrey reports that a group of approximately 20 riders from Dittons Velo had been riding along Portsmouth Road in Cobham last Saturday morning when they saw the man, aged around 60, collapse.

He struck his head on the kerb as he fell and while a motorist helped block the road and some of the cyclists directed traffic around the man, others moved him back onto the footway and obtained pillows and blankets from nearby houses.

They were joined by three cyclists from Fulham-based triathlon club Ful-On Tri one of whom, Katrina Head, was a trained first-aider who gave the man CPR, while a 999 operator talked through how to check for vital signs.

Stephen Heath of Dittons Velo told Get Surrey: “Long story short, we may have saved his life. We performed CPR. He was all grey and purple at one point. We sorted him out. He came back to consciousness.”

He added: “Katrina took command, she was a hero, she was amazing. There was a bit of blood because he banged his head, she didn’t hesitate. She had blood on her face.”

“The consensus was, everyone who witnessed it, this poor gentleman had unfortunately passed away and we all led by Katrina saved his life. It was quite amazing.”

The man had been bleeding from his mouth and another member of the club, Jamie Dunster, pressed a tyre lever into service to remove a blockage from the pedestrian’s windpipe.

“Really it was just a case of putting him in the recovery position and keeping him warm,” reflected Miss Head.

“We were very lucky that it wasn’t more severe and that we were able to bring him back quite quickly or it could have been a very different outcome.”

An ambulance arrived at the scene around a quarter of an hour after the initial 999 call had been made.

A spokesman for South East Coast Ambulance Service commented: “We were called to reports an approximately 60-year-old man had collapsed. We sent an ambulance car and one ambulance crew to the scene.

“The patient required CPR and that was taking place prior to our arrival which obviously is great.

“We would like to say thank you to those members of the public who helped the patient prior to our arrival.

“We attended the scene and continued the treatment. He also had a cut to his face and he was taken into St Peter’s Hospital for further treatment,” he added.

Last month, we published our guide on what to do if one of your riding buddies is injured in a crash, although as last weekend’s incident in Surrey shows, it may not be a cyclist who needs your assistance, and much of the advice in that article has a wider application.

> First aid for cyclists – what you need to know and do