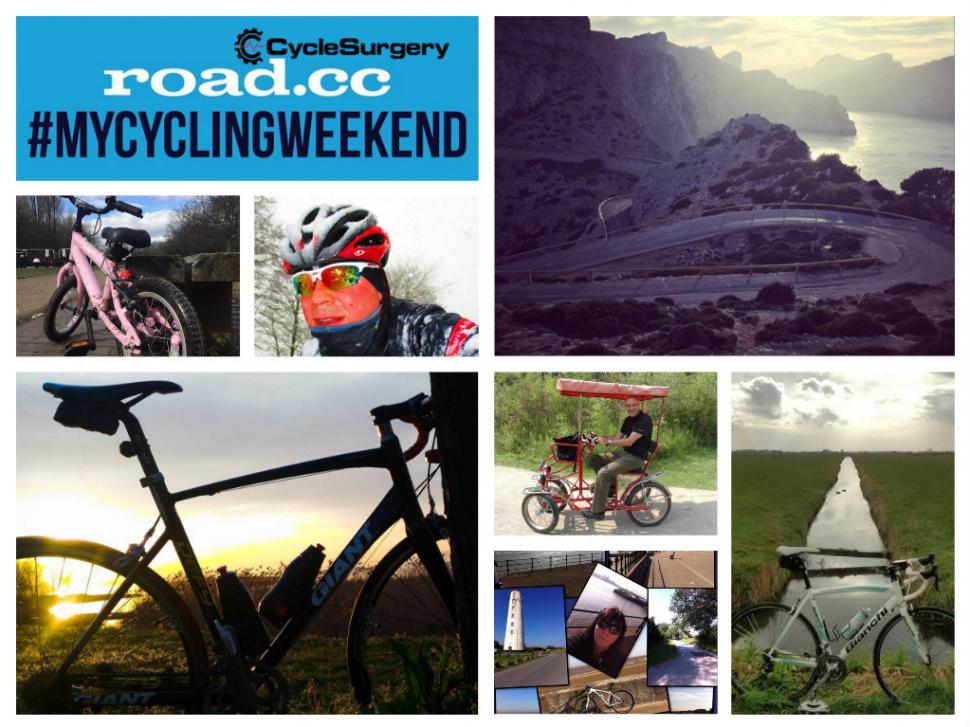 #mycyclingweekend - here's why you ride

For the views, the love, the coffee, and the really really weird bikes
by Elliot Johnston

This #mycyclingweekend we introduced you to our new partnership with Cycle Surgery that'll bring a new twist to the weekend riding fun; specifically prizes!

That's right, not only will the bunch of bike-mad cycle surgeons be contributing to each #mycyclingweekend by posting their own riding shots, they'll be offering the best photo of the weekend a fantastic prize.

This week's prize is a Cycle Surgery voucher, so you can get your hands on some kit of your choice. To win, all you had to do was tell us why you ride.

There were loads of reasons, from the reflective to the inclusive, from the glutinous to the hilarious. We loved them all, but below you can find a few of our favourites.

For loads of us heading out for a bike ride gives us a chance to meditate or reflect on the things that are going on in our lives. This little window of time away from computers and responsibilities can be invaluable.

We think Instagram user @yuktem sums it up particularly well in his #mycyclingweekend contribution below, and as a result, he's this week's Cycle Surgery prize winner!

Reply to our comment on your photo, @yuktem, and we'll get your prize to you.

While we're riding, deep in our own thoughts, beautiful scenery can play an equally relaxing roll in our peace of mind as the exercise or chance to reflect does.

Even just the ride itself can offer us a chance to let go of all of the things in our lives that are stressing us out and making us unhappy.

Just ask Ann Jordan. She bought her bike from Cycle Surgery, and as a result, she feels far less stressed. Keep it up Ann!

#mycyclingweekend #cyclesurgery #wirral I ride because it is the greatest way to destress! Especially on the best bike I have ever owned from cycle surgery

The beauty of cycling is that it can also be a social exercise. Not just with your friends, but with your family, and those you care most about in the world.

Most of us can remember our earliest bicycle-oriented memories. Heading out to the park with our parents, learning to ride, speeding through quiet residential streets with our brothers and sisters; memories like these are treasures.

Of course, there are other, more immediate gratifying rewards to cycling than making memories.

The more you ride, the more you can eat; for one. Also, coffee tastes so much better half way through a ride, and that caffeine kick can make all the difference towards the end of a cold winter ride.

Twitter user @young_phoagy knows all about that. It also looks like Toby Cummins on Instagram needed a bit of warming up this #mycyclingweekend without the caffeine boost.

Sometimes it's all about the coffee: Coffee Traveller in Chiswick #mycyclingweekend pic.twitter.com/tNWaFtjcPM

The bikes we ride are also often a big factor in our motivation for a #mycyclingweekend ride.

Usually its our sense of pride and techy lust that sends us into a frenzy over a knew bit of kit and the chance to try it out at the weekend.

Not necessarily in Twitter user @12Lexo's case. He appears to be far more interested in the extraordinary.

@roadcc @CycleSurgery #mycyclingweekend it's friendly, fun, free and loaded with fresh air - do you like my bike? pic.twitter.com/hjMJEaK7WI

No matter what the weather, we think it's beneficial to your head and your legs to get out for a weekend ride.

Instagram user @performancebywassberg clearly agrees. He didn't let the freezing conditions in Sweden get the better of him!

Instagram user @peted76's morning wouldn't be the same without his riding buddies in Leamington Spa.

They took to the trails on bikes with somewhat pudgier tyres than we prefer, but appear to have had a great time at it!

To be in with a chance of winning next week's fantastic prize, you've gotta fire a #mycyclingweekend photo our way.

To do that, all you've gotta do is head over to Instagram, Twitter, or our Facebook page, and upload a photo. Make sure to include the #mycyclingweekend hashtag, and also make sure that your contribution is in line with that week's theme.

Alternatively, just take a photo and ping it our way! We love seeing you guys riding and having fun!