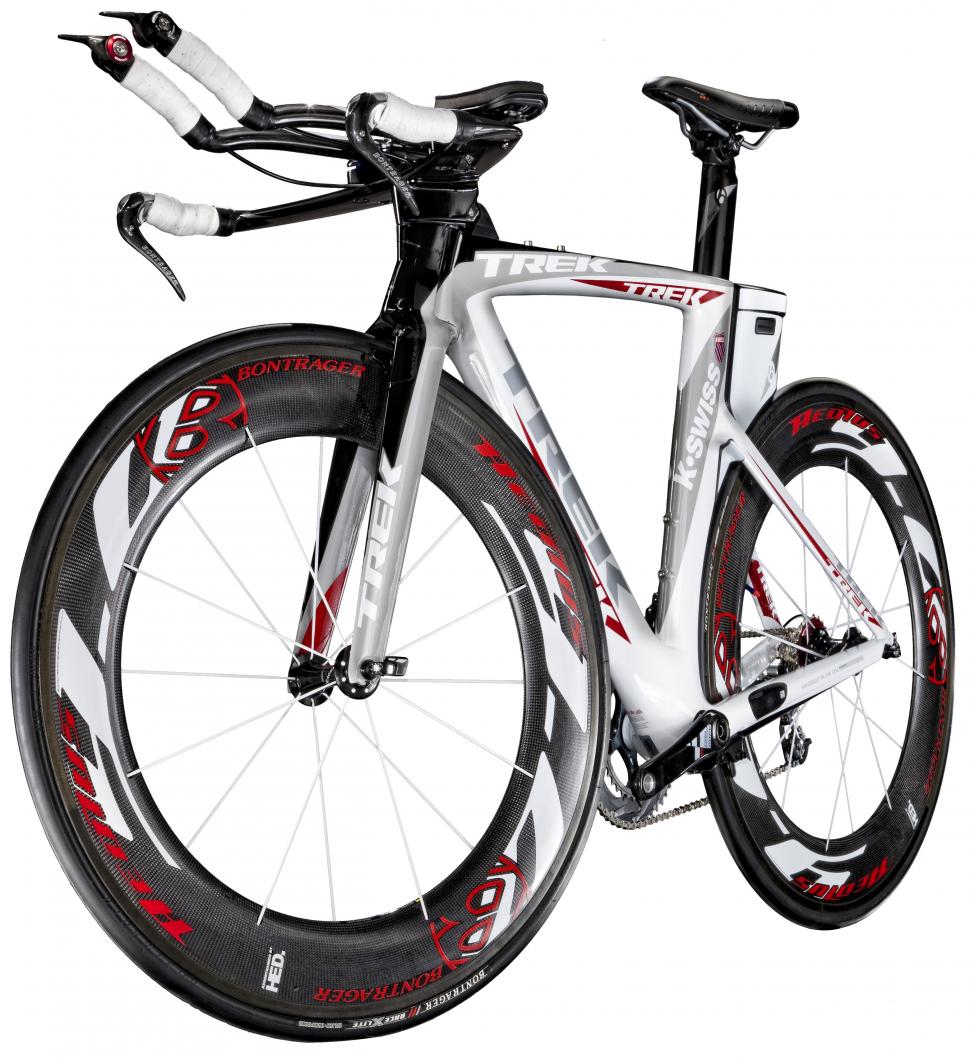 Trek have launched a new range of Speed Concept time trial/triathlon bikes which, they claim, are the most aerodynamic ever produced.

The technological highlight is Trek’s tube profile which they’ve named the Kammtail Virtual Foil (KVF). Essentially, KVF is a 5:1 airfoil shape with the trailing edge cut off – so, rather than a long, pointed trailing edge, it’s squared back there. Why? It’s all about the yaw – the angle of the crosswind.

“Basically, if you create a longer airfoil and truncate the trailing edge, it tricks the wind into thinking it is still full length, creating a virtual airfoil,” said Doug Cusack, Advanced Concepts Engineer at Trek. “The benefit is the virtual airfoil effectively bends with crosswinds, maintaining its aerodynamic properties in all types of wind conditions.”

Trek have been concentrating on yaw on the basis that air hardly ever comes directly at you in real-world conditions. Their beef with other aero designs is that although they might be slippery in the wind tunnel, hit the roads and the performance is compromised.

“The Kammtail design also allows us to create a tube shape that is stiffer and lighter than traditional aero designs, giving the bike more stability and better cornering,” said Cusack.

Trek reckon the Speed Concept is 200g lighter and 20% stiffer than their TTX Series.

The brake design of the Speed Concept 9 Series – the high-end bikes – is particularly impressive. The callipers are integrated into the front of the forks and behind the bottom bracket to such an extent that they’re hardly visible – they’re built into the fuselage.

You get a Bontrager SC Draft Box mounted between the top of the seat tube and the rear wheel on these models too, and an SC Speed Speed box on the top tube, so there’s plenty of storage for fuel and ride essentials. Again, integration is the name of the game, the bike actually being more aerodynamic with them fitted than without.

Borrowing existing Trek technology, a DuoTrap computer sensor is built into the chainstay for measuring both speed and cadence and those QR skewers we mentioned extend the lines of the frame/forks to improve the airflow.

On top of that, Trek claim the Speed Concept range has the most adjustability of any TT/tri bike available, with five different size options, six different stems, and a huge range of movement on the position of elbow pads and extensions.

Trek will produce three different Speed Concept platforms this year, and a total of 12 different models. There are five bikes, including two women’s specific models, in the top level 9 Series – priced from £5,000 to £7,500. They’re made in the US from Trek’s OCLV2 carbon and you can customize them through their Project One program.

There are five models in the £2,100-£3000 7 Series made using Trek’s TCT carbon, and two more in the hydroformed aluminium 2 Series, although we don’t have details on prices or availability there yet.

“The only bike that measured faster in the wind tunnel than the Speed Concept 7 Series was the Speed Concept 9 Series,” said Trek Road and Tri Product Manager Tyler Pilger. “The 7 Series offers amazing technology and an absolute best-in-class value.”

“We really wanted to create a line of tri-specific bikes with a model that’s perfect for every rider,” said Trek’s Global Road and Triathlon Brand Manager Nick Howe. “The introduction of the 2 Series really cements Trek’s dedication to the sport and our commitment to making best-in-class products available to every cyclist.”
The Speed Concept design was ridden by Lance Armstrong and Levi Leipheimer in some of last year’s major races, while triathletes Chris Lieto and Julie Dibens have also been putting the bike through its paces over recent months. Dibens rode one to victory in the Ironman 70.3 World Champs in Clearwater, Florida at the end of last season.

“I got the bike two-and-a-half weeks before Clearwater,” said Dibens. “It wasn’t ideal to switch bikes so close to a big race but as soon as I got on it just felt fast. I seriously felt that I was on the fastest bike at Clearwater and the other girls had a disadvantage. It can’t help but make you go faster.”

1
Cyclist fined after submitting dangerous driving video to police
2
World's first eSports pro cycling team sacks rider for cheating on Zwift
3
"Too ridiculous": Cyclist reports motorist for driving on the pavement... and is threatened with fine for 'cycling on the footpath'
4
British riders may be unable to race in Europe under new Brexit rules
5
Video shows cyclist being knocked down at roundabout
6
Five cool things coming soon from Merida, Bontrager, 100%, Farr and Hill & Ellis
7
Near Miss of the Day 547: “My fellow riders did not know how I was not hit,” says cyclist as Jeep driver tailgates overtaking motorbikers through pinch point
8
Custom bike specialist WyndyMilla unveils one-off tribute to guitar legend Eddie Van Halen