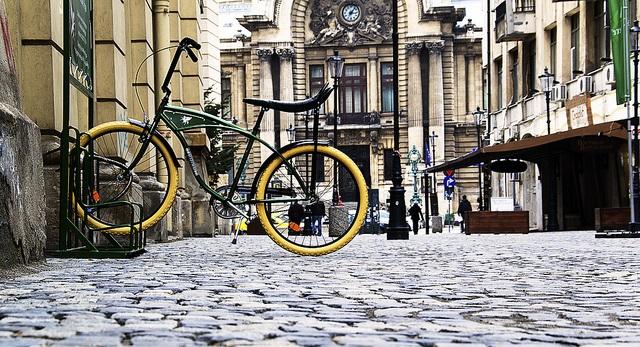 Communist era bikes back in fashion in the Balkans

Communist-era bikes are making a comeback in Bulgaria and Romania. Balkan Insight reports that their reintroduction is largely being driven by their popularity among Balkan hipsters.

In Bulgaria, a new version of the Balkan bicycle is going on sale. Produced by the original manufacturer, Lovech-based Balkanvelo, it will come in two versions – Comfort and Classic.

The Balkan, also known as Balkanche, is considered a symbol of the socialist era with production running from the 1960s up until 1989. Around 1.5 million of the most commonly known version were sold in the 1970s and 1980s. The new version is apparently a version of that model. It is a somewhat odd-looking steel folding bike.

The Balkan seems to give rise to a degree of nostalgia, with 28-year-old Borislav commenting: “I associate the Balkan with my childhood, my neighbourhood and my friends back then. I had the blue one with the long seat and back pedal. I will certainly get the one with the back pedal. The back pedal is so cool.”

In Romania, the Pegas is making a comeback for similar reasons. The Pegas was produced in Transylvania from 1972 into the 1990s and was brought back in 2012. Andrei Botescu, a doctor, had wanted to buy one and discovering that the trademark was free, he registered it and set up his own business producing what is basically a tribute.

In 2013, Botescu sold 500 bikes. Last year, he sold 3,000. He has now sold a majority stake in the company to a Romanian investor who plans on increasing production.

27-year-old Matei Cristescu echoes the sentiments of Borislav when he explains that that the popularity of the bike is basically down to enthusiasm for something which seen as being ‘vintage’.

"Most of the people who buy a Pegas heard from their parents or their grandparents when they were young that they're great bicycles. So, I decided to have one of myself – and I am fully satisfied.”