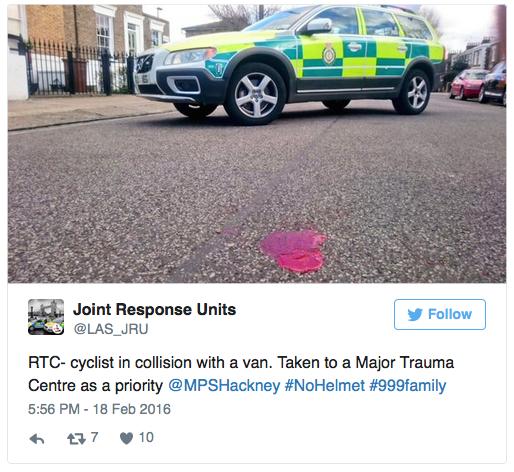 The local police and ambulance services in Hackney, East London, one of the most successful boroughs in the capital in terms of cycling numbers, have come under fire for a series of bizarre tweets about not wearing a helmet being ‘risky’.

The Joint Response Units tweeted on February 18th that they were attending a “RTC- cyclist in collision with a van. Taken to a Major Trauma Centre as a priority @MPSHackney #NoHelmet #999family”

It was sent after a call out to Northchurch Road, De Beauvoir, where a man in his 70s had head injuries after colliding with a van.

The hashtag #NoHelmet brought about an instant angry reaction on the social media site.

Jono Kenyon of the Hackney Cycling Campaign tweeted back:  “Hoping a speedy recovery. Not sure the #nohelmet hashtag is needed though. We don't do it for car drivers.”

But then Hackney Police weighed in, responding: “it's best to wear a helmet. Provides far more protection. We see injures from #Nohelmets”

But the police tweeter continued to argue in a string of tweets reading: “I would see it more as prevention than blaming. It's not necessarily the cyclists fault but you are more vulnerable.

“not wearing a helmet is still very risk [sic] in our opinion. That's what we were saying.”

Meanwhile the Joint Response Unit was back for more, saying: “A helmet would have prevented further injury to the head from the road. Tweet not about blame.”
Another member of the public said:  “disgraceful victim-blaming. Helmets aren't the law. Pedestrians and drivers don't get criticism for not wearing.”

Back in 2015 we reported how Chris Boardman told road.cc that cycle helmets are “not even in the top 10 of things you need to do to keep cycling safe or more widely, save the most lives.

But in 2013 Sir Bradley Wiggins said they should be mandatory for all cyclists.

Speaking to BBC’s Newsround, he said: “I think certain laws for cyclists need to be passed to protect us more than anything.

“Making helmets compulsory on the roads, making it illegal to maybe have an iPod in while you’re riding a bike, just little things like that would make a huge difference.”

However he was seen riding a Boris Bike in London without a lid just this month.