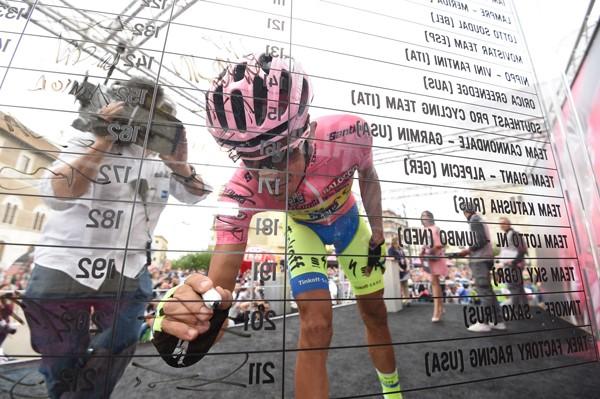 Alberto Contador looking to set up own WorldTour team

Alberto Contador has said he is looking to form his own UCI WorldTour team for the 2017 season and that he may continue riding beyond the end of this year reports Spanish sports daily AS.

The 33-year-old, one of only six riders to have won all three Grand Tours, says he has already been in contact with a number of sponsors to raise the budget of at least €15 million that would be required.

“We are optimistic and believe something good may come of it,” said Contador, who gave the chances of the project coming to fruition as 50-50.

His current team, Tinkoff, will fold at the end of this season with its owner, Russian entrepreneur Oleg Tinkov, saying in December that he is severing his ties with the sport.

> "F*ck all of them!" Oleg Tinkov to walk away from cycling

Speaking at the launch in Madrid of the under-23 team backed by his Alberto Contador Foundation, the Spanish rider, who has previously indicated that this will be his final season, said: “I see myself competing beyond 2016.”

“There are two options that have been running through my head that would make me rethink my retirement.

“One is that I have a crash during the Tour de France as I did in 2014 meaning I can’t perform as I’d like to.

“The other is to set up a professional team. This option is becoming the stronger one, although it’s complicated.”

He added however that if the team was not capable of supporting him in the Tour de France, the project “has no interest to me.”

Ultimately he sees himself as having a hands-off role in any team once he does finally hang up his wheels.

“I’ve had a lot of pressure during many years as a professional, so my role in the new structure, once I stop riding, would be in the background, not as manager or sports director.”

Contador’s 2016 season, in which his two main targets are the Tour de France and the Olympic road race in Rio, begins tomorrow in Portugal with the Tour of the Algarve, and he said that thoughts of his new team had not distracted him from his preparation.

“I’ve worked hard and I am highly motivated to get going,” he added.

The Tinkoff rider is the reigning Giro d’Italia champion but finished only fifth at the Tour de France, won by Team Sky’s Chris Froome.

He won the Tour de France in 2007, 2009 and 2010, although the latter title was taken away from him, as well as his 2011 Giro d’Italia victory, as a result of him testing positive for clenbuterol.