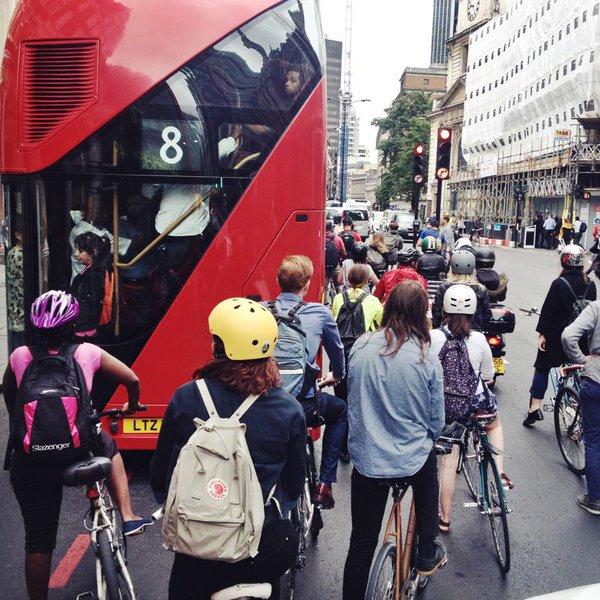 Winter weather will provide new challenges to newbie commuters, but cycling still the best way to commute during the strike, say campaigners
by Laura Laker

Three 24 hour tube strikes, planned within the next month could see far more cyclists on London’s roads than usual, and newbie cyclists are advised to be prepared for colder weather than during previous strikes.

The walkouts, due to start on the evenings of Tuesday 26th January, and Monday 15th and Wednesday 17th February, follow a breakdown in talks over pay and conditions between unions and Transport for London in plans to introduce a “night tube”.

During last year’s strikes in August and June, London’s roads were more than usually congested with motor traffic, and while bus passengers squeezed together cheek by jowl, London cycle lanes were packed with new commuters.  Strava's busiest day in the UK was during 30th June tube strike, when 64,319 commutes were recorded and 1,147,073km covered.

Munk told road.cc: “Cycling is a great way to get around, and extra cyclists on the roads can mean it is a more pleasant experience. When the tubes are down and you’re on a bike chances are there will be a lot more cyclists.”

“It is just going to be a lot less frustrating than nearly every other option, including waiting for an incredibly crowded bus, or walking miles. Cycling is going to get you from A to B predictably and it is one of those moments where because a lot of other people are riding it’s going to feel a lot easier than normal.”

He said it is important cyclists look out for one another and give each other space on the roads and that those unused to cycling are prepared for winter weather, as well as making sure they bring lights if their return commute takes place after sunset.

He said: “For anyone who’s cycling this time of year there’s a whole set of challenges that they won’t face in the summer in terms of making sure they wrap up warm, making sure their hands are warm, being careful of icy puddles and ice when cycling around corners. If you’re cycling back after dark lights are important, being visible, but also having a good visibility on the roads.”

He advised cyclists to stay away from the gutter where there may be icy puddles, which will also make cyclists more visible on the roads.

For those without bikes, Santander Cycles last year put on extra temporary hubs at major stations and docking points across the capital.

Brompton has 20 docking stations in London and the South East, and bikes can be hired for 24 hours for £2.50. Its docking stations are at Peckham Rye and Croydon, Turnham Green, Ealing Broadway and Walthamstow. Beyond London multiple docks are available at Reading, Three Bridges, Redhill and Oxford.

A Brompton spokesperson said: “Once hired from a public dock your Brompton can be ridden to work, taken home and when folded, taken on all forms of public transport as well as in the boot of the car. The integrated journey, the fastest way to travel across any City, has due to Brompton now become a reality! We know that of over 90,000 private London Bromptons 10% of owners started using their folding bike during a public transport strike.”

In previous years London Cycling Campaign's local groups have organised bike repairs and led rides into the city centre during strikes, which is likely to happen again this year. Details of this are pending.

According to the Evening Standard talks between conciliation service Acas and Unite, which represents 600 engineers and maintenance staff, were set to resume this week, following the union's withdrawal from strike action. However, both Aslef and the Rail, Maritime and Transport union (RMT) are still planning on striking.