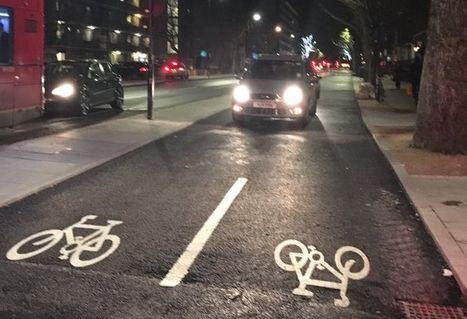 A London cyclist has tweeted a picture of a car that tailgated him on the North-South Cycle Superhighway in Southwark, despite the route, which is physically separated from the main carriageway, being clearly marked as only for bicycles.

Alec James, who recently left Sustrans to join the press office of the Department of Energy and Climate Change, posted the picture to Twitter yesterday evening. It was taken across the road from the Blackfriars Road headquarters of Transport for London (TfL).

Tailgated by more clowns driving in the segregated superhighway this evening. Where do these people come from?? pic.twitter.com/acNXkWcL3l

Asked by cycling author Carlton Reid, executive editor of BikeBiz, whether he believed it was on purpose or a mistake, he said the person was “certainly driving like they knew it,” adding that you “can do pretty much what you like on the roads on Sunday evening.”

When the separated bike lane on Vauxhall Bridge opened late last year, attention from media outlets such as LBC was on cyclists who choose to ride (quite legally) on the main carriageway instead.

But there has been little about the danger posed to bike riders by motorists taking illegally to the Cycle Superhighways.

In Cambridge, metal bollards were put in place to stop drivers getting onto the cycle track running alongside the city’s guided busway – although as we reported last month, the council is now removing those on safety grounds after a cyclist crashed into one.