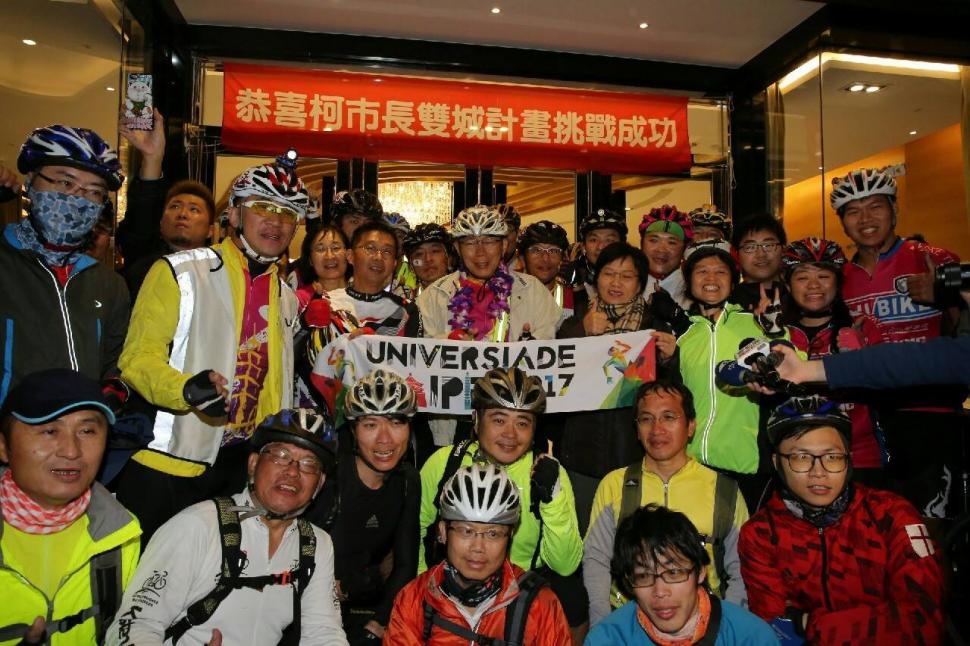 Dr Ko Wen-je, 56, said he had to believe in himself, and follow his ‘crazy dreams’.
by Sarah Barth

The Mayor of Taipei has completed a 380-km cycle ride in less than 21 hours - saying that he had to believe in himself, and follow his ‘crazy dreams’.

With a group of other cyclists, mainly bodyguards and logistics experts, Dr Ko Wen-je, 56, went to a temple in Kuandu on Saturday morning to pray, before setting off at 5am in cold rain.

He arrived before midnight in Kaohsiung, having said that he would not be able to stop for interview or photographs en route, as they might slow him down.

"The most important thing is to leave on time after each stop," he told Focus Taiwan. "Quite often, it takes more than 30 minutes just to pose for pictures with people."

Yang Po-chien, a fellow cyclist, said before the ride: ”If all goes well, it will be no problem for the cyclists to reach Kaohsiung by 2 a.m. Sunday," adding that the northeasterly winds along the way will help the cyclists.

Ko will now stay overnight at a hotel before travelling to Pingtung, Taichung and Hsinchu by car to take part in campaigning ahead of the Jan. 16 elections.

Dr Ko Wen-je, a high-flying surgeon who established Taiwan's standard procedures for organ transplant, won the mayoral race in late 2014 despite no previous political experience. The job is widely seen as a stepping stone to presidency.

In March 2015 he announced the he was seeking to integrate the bicycle into the Taipei transportation grid - a city where bikes are mainly used as recreation as opposed to transport.

He said at the Asian Cycling Forum 2015 in Taipei that he would aim to build bike paths on all roads that are 40 meters or more wide.