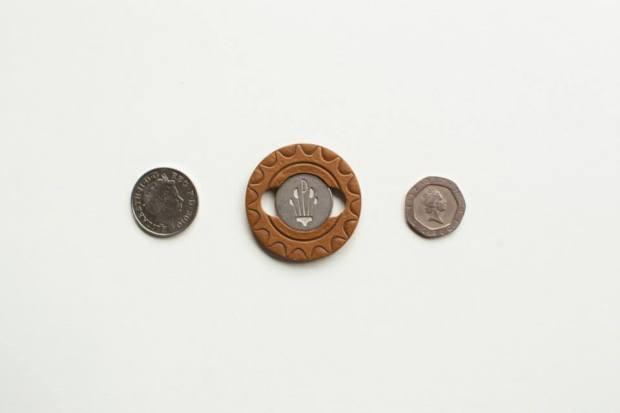 Penny in Yo' Pants designed by frustrated cyclist will now be available to buy...
by Sarah Barth

Despite missing its crowdfunding target, a device intended to help women protect their modesty while cycling in a skirt is to go into production, with half of the profits set to be donated to the Afghan women’s cycling team.

The Indiegogo campaign raised just £1871, a little over a third of its target - but its creator, Johanna Holtan, who works on the strategic projects team at Edinburgh University, went ahead to create a prototype with MakLab in Glasgow.

The simple device, which can be used with any coin (indeed it began life as a penny and a rubber band), holds the back and front of the skirt together to create an impromptu pair of shorts.

Place the puck against the front of the skirt and hold in place.

Behind your skirt, push the penny through both layers of skirt and through the puck.

Adjust the penny and fabric so it sits comfortably.

Now throw your leg over the saddle and you are off!

Johanna said: “We’ve handcrafted Penny in Yo' Pants to fit neatly into your bag or pocket.  The puck is faux leather with an aluminium coin that fits neatly in between the slot on the puck. The two snap together when you aren't using them - you can also use them as a brooch or scarf clasp.  If you lose the special penny, don't worry! It can be replaced with any currency coin.

“This was a trick that meant I didn’t need to take different clothes to change into when I got to work or wherever I was going.”

She told the Scotsman: “It wasn’t something I invented myself, it was me and also some friends and we came up with the idea. We made a funny video of me doing it and put it on YouTube but we had no idea so many people would see it.

“Someone told me we’d had more than three million views and I couldn’t believe it. I was actually embarrassed when I heard as on the video, I’m almost flashing to three million strangers.”