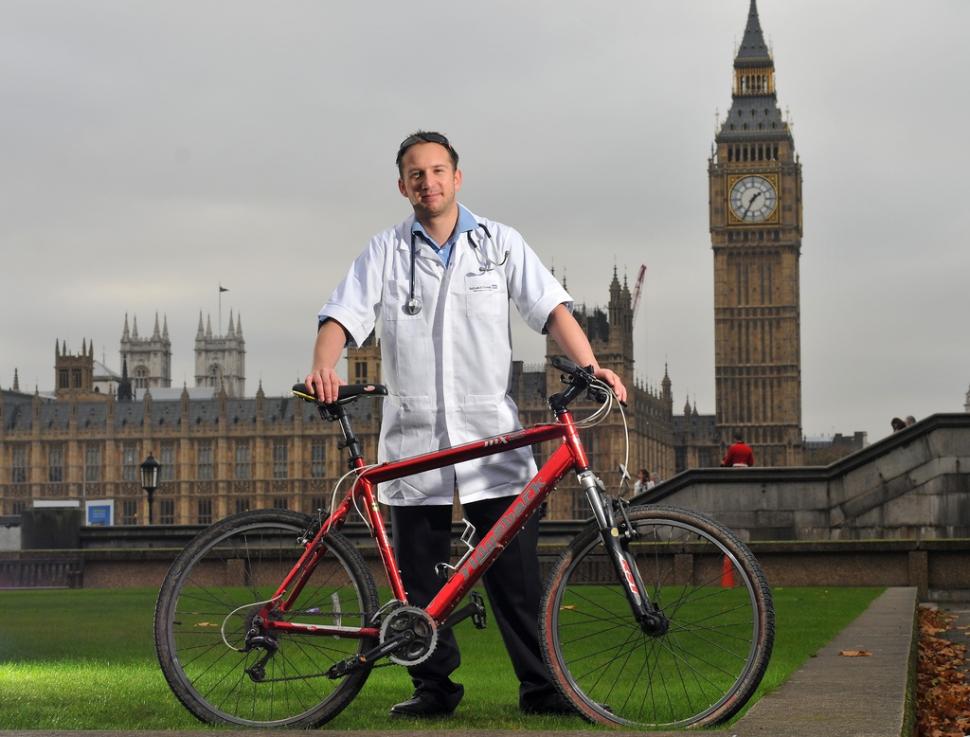 Medic "heartbroken" at having to break journey, but hopes to resume 50,000 odyssey soon...
by Simon_MacMichael

A doctor from Oxfordshire has had to put his dreams of spending the next five years cycling the world on hold after developing a knee problem that requires surgery less than four months into his journey, and has hitchhiked from Turkey back to Britain for an operation.

In January, Dr Steve Fabes left London to begin his quest to cycle 50,000 miles – almost three times the distance of a typical circumnavigation of the globe by bike – to raise money for the medical aid charity, Merlin.

On his blog, however, he described how he felt “Gutted. Crushed. Heartbroken” after a small piece of cartilage broke free from his knee due to the exertions of pedalling across Europe, which an orthopaedic specialist diagnosed as what is known as a “joint mouse” that would require keyhole surgery to remedy followed by three months’ rest.

Steve, who worked at Guys & St Thomas’s Hospitals in London before setting off on his adventure, said that the condition affected between 15 and 30 people in 100,000, adding that the fact that he had contracted it meant that his “dream of an unbroken journey around the world by bicycle lay in tatters.”

He continued: “It was a punch in the stomach that wouldn't kill me but didn't feel like it would make me any stronger and in an instant I plummeted to my lowest ebb.”

The cyclist resolved to head back to Britain for treatment, and faced with a ten-day wait for a plane out of Istanbul due to disruption to airline schedules caused by the volcanic dust cloud emanating from Iceland, decided to hitch-hike as he had done back home as a hard-up teenager, figuring that this would also help him continue his travels with a sense of adventure.

As recounted on his blog, his journey home was completed with the help of a collection of kindly motorists and lorry drivers, notwithstanding the attentions of the Italian police with whom he had a discussion about whether a service station did or did not form part of the motorway, as well as the attention of “boy racers” heading to the Greek coast for a ferry to Corfu, one of whom lobbed a water bottle at him as he passed. At least he’s in good company there.

After briefly putting hitch-hiking aside to catch a train from Genoa to Turin, where he caught the Mayday parades, Dr Fabes headed up through France for a ferry across the English Channel and, finally, home.

Now that the adventurer is back in Britain, where he is staying at his mother's home in Oxford while awaiting his operation, he says that he is “trying hard to avoid anything resembling my old life. I don’t want to feel that I’m moving backwards.”

He continues: “I will return to Istanbul" - where he has left his bike, named Belinda - "probably towards the start of August,” adding, perhaps optimistically, “after England win the world cup.”

Steve is currently nearly one fifth of the way towards achieving his £50,000 sponsorship target, and you can help him reach that by making a donation here.