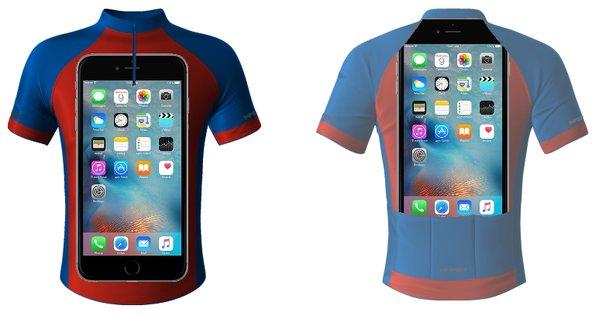 Is this the highest visibility cycling jersey ever? Working on the theory that phone screens are brighter than cyclists and are seemingly more likely to draw a driver’s gaze, cyclist Jon Wyatt came up with this innovative design.

The idea came about following a recent exchange with Leigh Police who had published a tweet advising cyclists to wear hi-vis clothing.

Jon told road.cc that despite wearing hi-vis himself, he didn’t think it made much difference. “I've been riding on the road for almost 40 years and I'm confident it makes little, if any difference. It's a rabbit's foot that we just can't let go of though – myself included.”

Jon recently had two different people pull out on him on two consecutive mornings.

Another commute, another idiot in a car pulls out front of me. I'm lit up like a Christmas tree. Your stupid advice doesn't work @GMPLeigh

“My own experience is that people simply don't look properly – usually because they are distracted by something. We all know how common mobile phone use is while driving – especially since as cyclists we can see down into cars as we ride past and see how many people have their phones in their laps.”

A friend commented the drivers had probably been looking at their mobile phones at the time and this sparked the idea.

OK. I've invented the highest visibility cycling jersey ever. I guarantee all drivers will see you in this. pic.twitter.com/wxo6wa5QrK

“If anything useful can come out of my post then it's that if the police and charities really want to give out useful, life-saving advice, it would be to make yourselves visible but still assume that drivers haven't looked properly at junctions, assume they are going to pull out, stay focused and be ready to take avoiding action.”