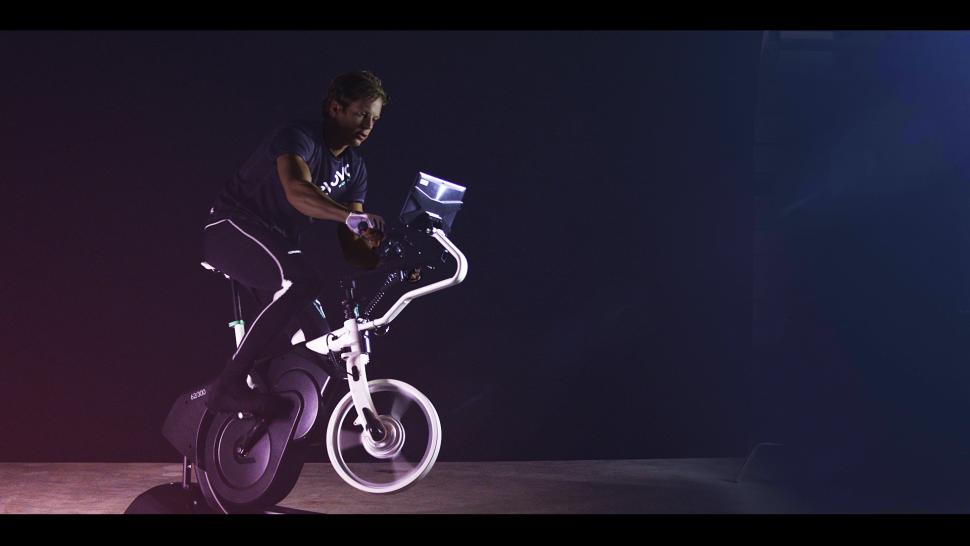 Ebove, which reacts to a variety of cycling tracks, is the Nordic solution to spice up indoor cycling - but Brits will have to wait a while for it
by Laura Laker

If we’re going to spend an average of 20 hours online per week – which is what we’re doing these days – we may as well be cycling while we’re doing it, right?

At least that’s what the Ebove cycling simulator makers think. Activetainment, the Norwegian company behind the Ebove bike, believe turning some of our ‘virtual’ time into a workout is the answer to our growing obesity epidemic, but is gaming while training the answer, and is it affordable? The answer, at least on the second point, is probably not for most people.

The machine, which looks a bit like a praying mantis, and comes with 3D mountain biking, road racing and velodrome tracks, reacts to virtual terrain projected onto a tablet or screen, which means it pitches and rolls with the track, like any other simulator, and has added pedal resistance response for hills and gear changes**.

Activetainment’s Annabel Darby says the company hopes the simulator will appeal to people as a fun alternative to indoor cycling, though the cost, at $6,000-$8,000 may well put it out of most people's price range.

Darby said: “We have had very positive feedback from the few thousand that have tried out our bikes at various events in Norway and the UK, with the most striking point being that around 9 out of 10 agreeing that they forget that they’re exercising because they’re enjoying themselves so much.

“There is obviously a global issue of inactivity and obesity, so we feel that anything that can be developed that helps encourage more people to be active can only be a positive thing. The gaming aspect will, we hope, appeal to those who maybe would never have seen themselves try indoor cycling too.”

The setup is Virtual Reality compatible, and riders can race one another in multiplayer mode. Bikes are available to pre-order, but for now they’re only fulfilling orders in the Nordics (Norway, Sweden, Denmark, Iceland and Finland). The company told road.cc the bikes will go on sale in the UK in the second quarter of 2016.

** Road.cc can confirm this – we’ve tried it, it's got a bucking bronco-cycle feel, without the peril of falling off.