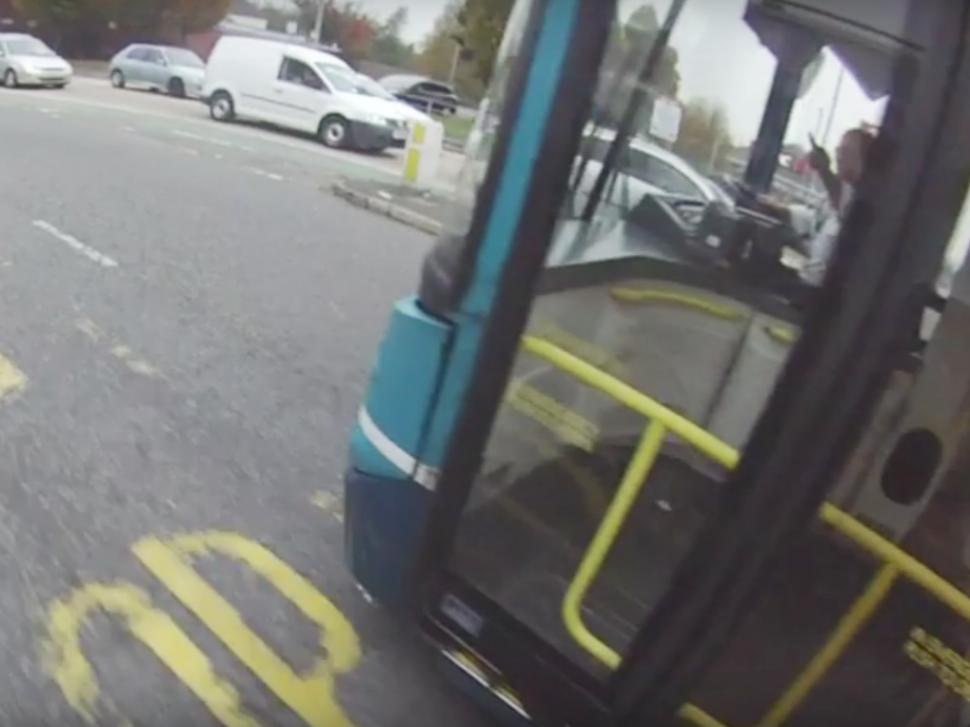 Bus company defends its driver; says there was a safe passing distance
by Alex Bowden

The Arriva bus company has defended one of its drivers after a cyclist published footage to YouTube of a close pass. The author of the Mr Happy Cyclist blog said he was also tailgated by the driver who gesticulated at him as he overtook.

The incident took place on October 31 on Blackburn Road, Bolton near the junction with Halliwell Road. Mr Happy Cyclist opted to go through the junction in primary position, having had a bad experience with the cycle lane there previously – also involving an Arriva bus. However, it seems the bus driver took objection to this course of action.

In late November, Mr Happy Cyclist wrote to Arriva about the incident, saying:

“I was riding my bicycle home from the shops last Saturday afternoon. After I correctly cycled through the junction in primary position, I was tailgated by your driver who then overtook me too closely whilst gesticulating angrily at me and then moved in towards the kerb as I was still alongside. He then set his hazard warning lights flashing as he completed the manoeuvre and proceeded along the road.”

Arriva responded to say that the CCTV footage from the fixed camera on the bus had been viewed by the Bolton depot manager. In his opinion, there was a safe passing distance between the bus and the bike.

The company added that it was ‘unclear’ why the cyclist had not used the cycle lane until the bus was overtaking. “The cyclist can be seen in the middle of the road, some cyclists are advised to take prime position, however his road position does appear extreme and a good part of the cycle lane has been ignored.”

As Mr Happy Cyclist points out, he is not obliged to use the cycle lane and in this instance felt that it was actually safer to avoid it. “A cyclist using it risks being caught between a large commercial vehicle and a steel fence over the apex of a sharp bend in the road where nine out of ten vehicles cut the bend.”

My Happy Cyclist believes it was an instance of road rage on the part of a driver affronted that he wasn’t using the cycle lane. He believes that switching on the hazard warning lights of the bus was an indication that moving in towards the kerb was a deliberate punishment pass.