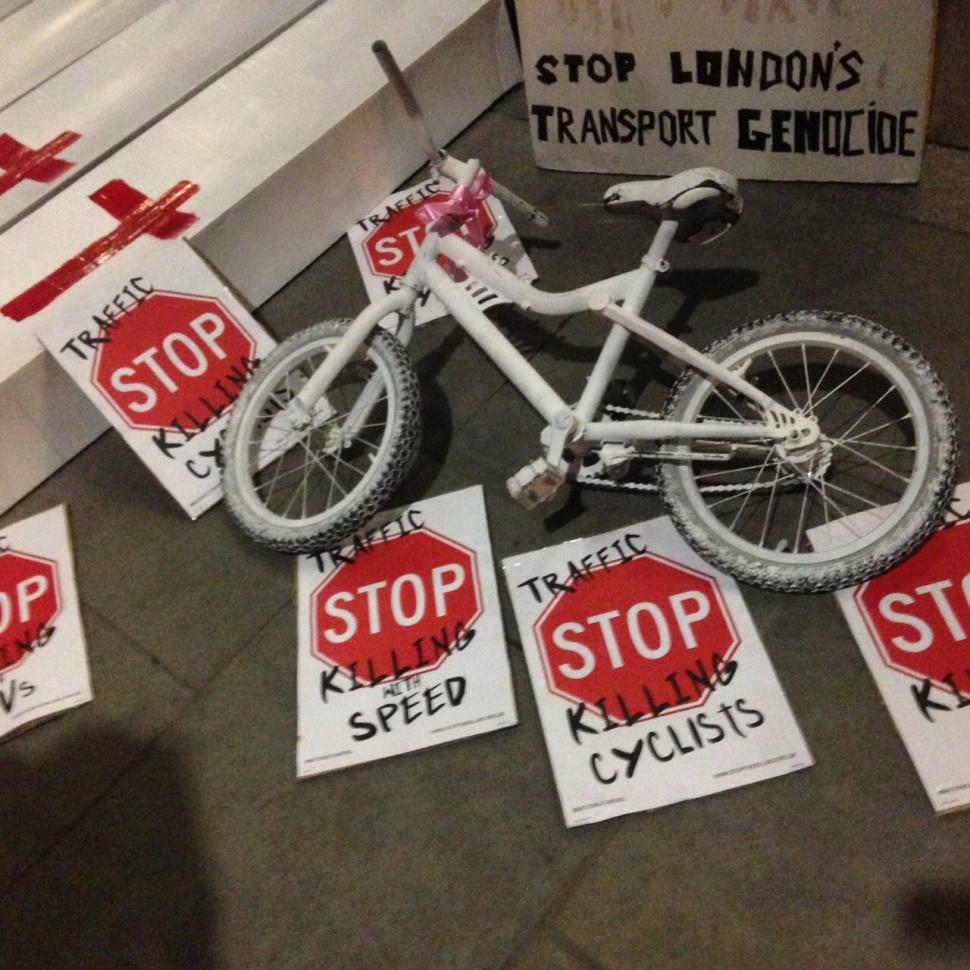 21 mock coffins - one for each of the people killed while riding bikes in London in the past two years - were placed outside the headquarters of Transport for London (TfL) yesterday evening as the campaign group held its third annual die-in calling for safer streets for people on bikes and on foot.

The group was founded in November 2013 after six cyclists died in the capital in the space of a fortnight, and once again evening rush hour traffic was halted for a quarter of an hour while dozens of protesters lay down alongside their bicycles on Blackfriars Road.and pretended to be dead.

Many of those working in the TfL offices looked down on the scene opposite Southwark underground station at last night's 'No More Coffins' protest, with the group calling on transport chiefs to invest a tenth of its budget to make the streets safer for vulnerable users.

Co-organiser of the event, Nicola Branch, quoted in the London Evening Standard, said: "We want 10% of the TfL budget to be spent on cycling infrastructure. At the myoment it is only 1.4% of their transport budget and that's nowhere near enough.

"As cyclists we are the canary in the coalmine, you sort out the problem of cycling deaths first and then all the other deaths fall into place."

Cyclists injured on the city's roads also spoke at the event, including Vicky Lebreck, aged 25, whose right leg was amputated in December last year after she was crushed by a lorry.

"I don't think it should be a possible outcome that a mistake made by a driver means people cycling on London's roads should be dying or having dramatic injuries," she said.

Andrew Hossain, who rides around 100 miles each week in the city centre and in suburban areas both while commuting and for leisure, expressed views that were typical of those held by some of the cyclists road. cc spoke to at the protest.

"Personally I feel fairly confident riding on London's roads, although I do tend to ride outside of peak hours and as a life long Londoner I have a good knowledge of the more cycle friendly routes, even when they are not very well signposted," he told us.

"I strongly support Stop Killing Cyclists' campaign to keep up pressure on our politicians for much improved provision and spending for non-motorised transport. And almost all of us are pedestrians who are even more vulnerable.

"Not just for cyclists like me but more importantly others such younger and the older people, along with visitors and shorter term residents, particularly those who want ride but currently not doing so, being put off by safety concerns.

"Public health is greatly improved by a more physically active population. Often overlooked is the fantastic boost to mental health by the freedom of riding the open road under your own steam on a bike.

"That's not to mention the benefits to all residents and visitors by reducing our city's air pollution, a vast proportion of which is produced by motor traffic," he added.

TffL'smanaging director of surface transport, Leon Daniels, underlined the investment already being made in improving conditions for London's cyclists.

He said: "We are investing nearly £1 billion in upgrading the existing Cycle Superhighways with greater segregation, introducing major new segregated cycle routes and backstreet quiet routes, and overhauling dozens of junctions both on our roads and on borough roads, to give more protection to pedestrians and cyclists."