Shimano offshoot Pro haven't just been busy perfecting their Mark Cavendish signature bar and stem of late, they've also been working with the time trial contingent of team HTC Columbia. The team's Scott Plasma bikes needed a new aero bar and Pro have stepped up to the plate with a completely new system called the Missile, not to be confused with their old aero system, the Missile.

Anyhow, it replaces the company's current setup at the top of their aero range and it'll be available next month. The new kit is already race proven, scoring a win in the Tour de Romandie prologue piloted by HTC Columbia's Marco Pinotti.

So what's new? Well, as you'd expect from a division of Shimano the new Missile bar is fully Di2 compatible, with completely integrated brake and shifter cable routing throughout. While at first glance you might think this is an all-in-one bar and stem combo, it's not: the chaps at Pro have opted for a separate stem that intgrates pretty seamlessly with the base bar. It's going to be available in 85, 95 and 105mm lengths (17° drop) so you can tailor your position. It has a slippery pointed nose cone, recessed fixing bolts and even a matching aero top cap that might save you a hundredth of a second. 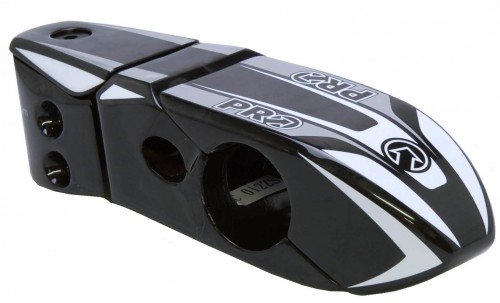 On top of the stem, further position fettling is possible using the alloy 'chimneys' that the system uses to mount the extenstions and arm rests. As you can see from the pic below, Pinotti ran quite a few spacers on his Missile setup on his way to the prologue win, but you can set the bars up high or low depending on your bike. The claimed weight for the 40cm base bar, aero extensions and arm rests is 595g and the chunky stem adds another 280g. We don't have a confirmed price for the Missile yet but we're guessing that it ain't going to be pocket money – full Carbon team issue stuff never seems to be, sadly. We'll let you know as soon as we find out, and you can expect the system to be adorning the walls of your friendly local IBD (or, at least, available to order) from the first week in June.