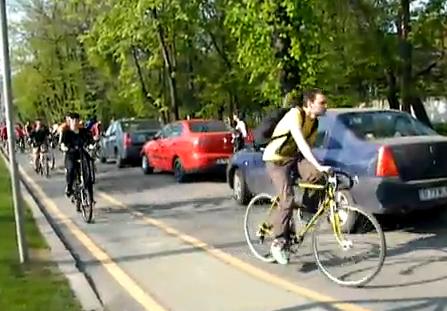 From bike-borne businessmen to BikeWalk ride, cycling is raising profile in car-choked city
by Simon_MacMichael
0

A young entrepreneur in Bucharest is helping spearhead efforts to reclaim the city’s streets for cyclists to help the Romanian capital shed its “Apocalypse on Wheels” nickname.

The latter is the name of a 2008 HBO Romania documentary directed by Alexandru Solomon which highlighted the city’s endless traffic jams as well as the disregard for traffic laws displayed by many drivers.

Now, Tudor Maxim, president of the local branch of the Junior Chamber International, is aiming to raise the profile of cycling and promote it as an everyday form of transport.

Last Thursday, Maxim led a hundred or so suited and booted businessmen and women on a bike ride around the city as part of an initiative called “Business on a Bike,” according to an AFP report published in the Independent.

"We want to prove that you can bike to work and be well dressed", he explained.

"Mentalities have to change in Romania about biking. Lots of people do not imagine you can go to work on a bike."

It’s a brave undertaking. Bucharest, a city of 2 million people, has just 28 miles of cycle lanes, compared to 310 miles in Amsterdam.

However, cycling is slowly raising its profile in the city, with websites springing up to promote the bicycle as a means of transport, and a bike-hire scheme, Cicloteque, now open to locals and visitors alike.

There, they were treated to a programme of bike-friendly events including a screening of a film about the movement to promote cycling in the Czech capital, Prague, as well as being able to benefit from a bike workshop and enjoy live music.