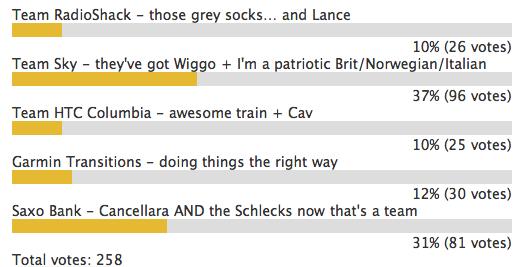 Road.cc readers back Team Sky... well, after Kuota-road.cc, of course

With more than a third of the 250 or so votes cast, Team Sky gets the nod from road.cc readers as their favourite cycling team – apart from Kuota-road.cc, of course which we assume you’re all supporting anyway.

That suggests that many of you will be glued to the TV or computer screen as the British ProTour outfit makes its Grand Tour debut in next month’s Giro d’Italia, but Fabien Cancellara’s back-to-back breakaway wins in the Tour of Flanders and Paris-Roubaix saw Team Saxo Bank come in a creditable second and not too far behind, with three in ten users giving their backing to the Danish outfit.

Garmin-Transitions, who like Kuota-road.cc of course sport a bit of argyle on their jerseys, came third, possibly due to the impact of their anti-doping platform, typified by David Millar who has become a high-profile voice in the war against drugs cheats since completing his own ban.

Most surprisingly, however, despite having a kit that appears to leave many fans less than excited – particularly those grey socks – Lance Armstrong’s Team RadioShack edged out Columbia-HTC for fourth place by a single vote, with each getting support from 10% of users.

While it’s perhaps surprising to find HTC-Columbia in fifth and final place, its showing is unlikely to have been helped by the fact that Mark Cavendish’s early season problems have taken attention of British cycling fans away from his team.

Two road.cc users highlighted teams not included in the poll that they considered worthy of mention – Rapha-Condor got the nod from Fringe, and while they’re outside the ProTour, you have to admit they have some lovely looking kit and, of course will be vying for success with our very own Kuota-road.cc in the coming months, so we’ll be keeping a close eye on them.

Roadkill, meanwhile, gave his vote to Cervélo Test team, not least because of their brace of Brits, Roger Hammond who recently enjoyed top-ten places in the Tour of Flanders and Paris-Roubaix, and Jeremy Hunt.