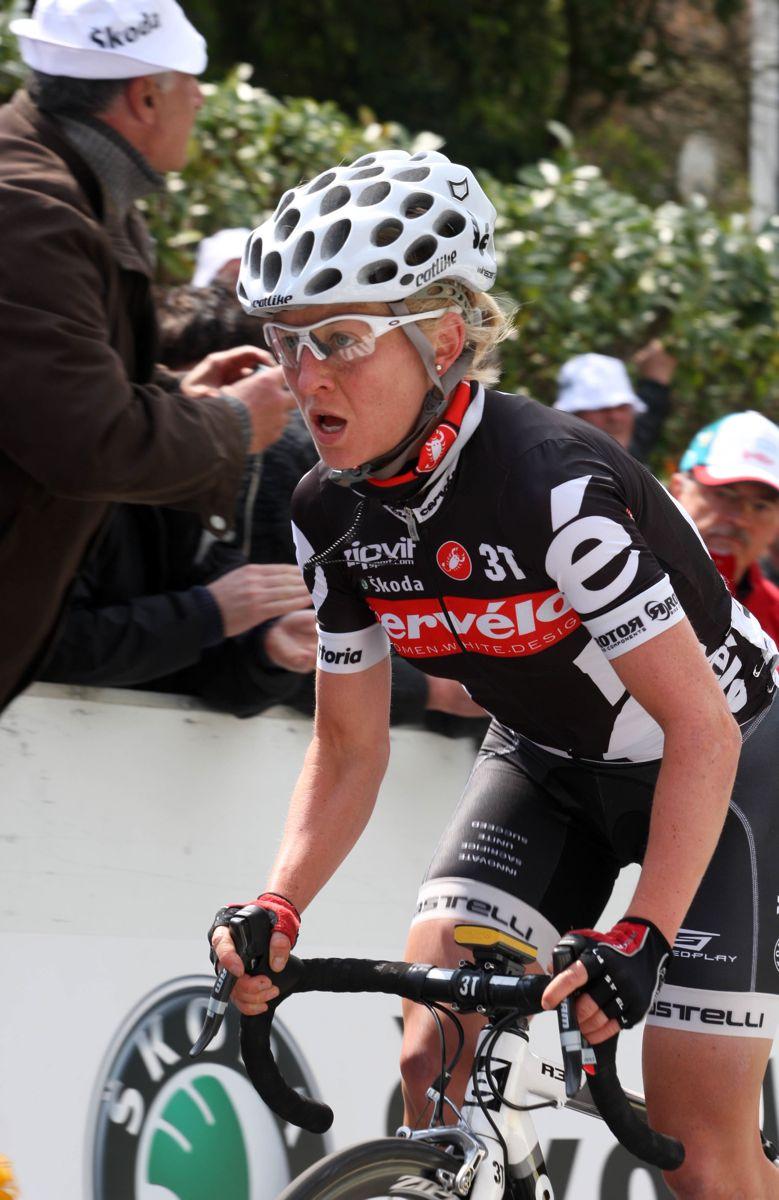 Sweden’s Emma Johansson finished third behind Cooke, herself a three-time winner of the race, and riding yesterday in the Great Britain colours due to her currently being without a team.

Yesterday’s victory in the 109-kilometre race means that Pooley, winner of last year’s women’s Tour de France, moves into fourth place in the World Cup rankings, and the 27-year-old from Norfolk was quick to praise her team-mates for their contribution to her win, telling the Cervélo TestTeam website: "I have to say I have never gotten to the end of a race having done so little work.

“I have the most awesome team behind me. I didn't have to do anything at all. We had a really good team any of them could have won today. We have really good climbers they did absolutely everything. On the first climb at the Mur de Huy we had four girls in the front group. I wouldn’t have won on the Mur if the riders on the other teams hadn’t been so tired from taking down the other girls. Basically it was them who won the race. All I had to do was the last kilometre it was really easy,” she laughed.

Pooley continued: “I attacked a little early on the really steep part, the ‘s’ bend. I was supposed to wait for the team but attacked a little earlier because I was really impatient and a bit nervous that I might fall off my bike in all the excitement! So I went a bit early, and I had a gap but you never know on the Mur whether someone comes back at the end. It's only three hundred metres from there but it feels like miles.”

According to Pooley, winner of the silver medal in the Individual Time Trial at the Beijing Olympics, it was vital that she attacked when she did since it allowed her to make the most of her strenghths. "I had to take advantage of the steep section because my power is rubbish, it's only my strength to weight that is okay. Of course you can't do that unless you get to the end fresh. I can never usually do that because I waste a lot of energy, but today I had my team protecting me. It was like being baby sat the whole way.”

In winning the race, Pooley also had to overcome an element of self-doubt. “Last year I said I’d never win a World Cup again and said the same thing this year,” she explained. “But this is not any World Cup it has a lot of tradition. It’s a big race and my coach told me, he thought one day I’d win it and I said no, I could never win this race. But it’s not me who won it. It’s the team. We had Claudia Häusler as the captain on the road. She was making the decisions, very calm, she knows what she’s doing and another time she’ll win it too, maybe next year.”

Cervélo TestTeam sport director, Egon van Kessel said that the race plan had been set the previous evening. “In the first lap of 80 kilometres, entering the Mur for the first time, our riders would not do too much,” he explained.

“I told them if one or two riders attack, we don’t care, don’t attack it is not a problem for us if that happens. On the second ascent, I think Emma was already the first on the top. Just after Emma, Regina [Bruins] made an attack, that was also a little bit calculated between Regina and myself, putting a lot of pressure on the other teams and that was a big advantage for our team.”

He continued: “So with fifteen riders we entered the last climb of the Mur where we said Emma could attack, as it was the best place, just before the steep part of the climb. As you know she won which was really great. For us, the winning of La Flèche Wallonne was a big goal.

“These two races - Flanders for the women and La Flèche Wallonne they are really top ranked,” he added. “If you win one or both of these, that is something. We were close at Flanders and now today, we’ve done a good job. It’s not easy to win, even though we have a strong team.”

The Dutchman also acknowledged that in winning the race, Pooley had to overcome her compatriot Marianne Vos, winner of the last three editions, who finished sixth. “Beating Vos on her own mountain, the Mur is the Vos mountain, that is a very strong performance I think.”