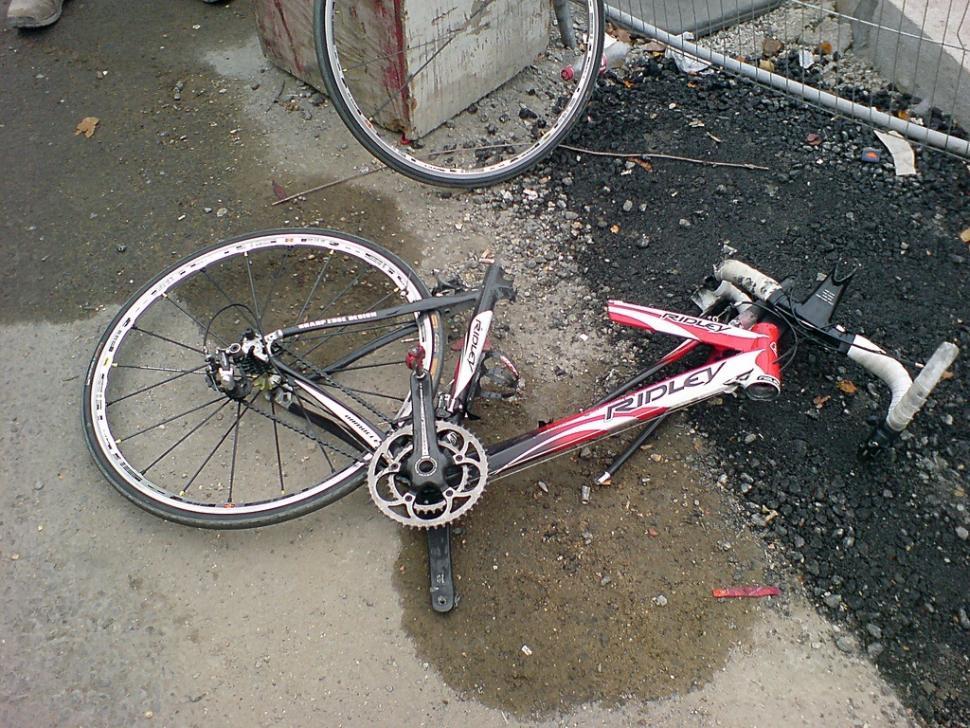 This picture, submitted to our road.cc readers’ rides group on photo-sharing website Flickr a couple of months ago, is an arresting one, enough to give pause for thought to any cyclist. A carbon road frame snapped into pieces, the front wheel almost bereft of spokes. Frame or spoke failure, perhaps? The truth is much more troubling.

One morning last September, a road.cc reader who on Flickr goes by the name TchmilFan – given the traumatic circumstances, we’ve agreed to respect his anonymity – was riding to work through West London when he was involved in an exchange with a car driver that he describes as “a pretty run-of-the-mill commuting incident up until he decided to carry on driving.”

We’ll let TchmilFan take the story up: “During morning rush hour, coming up to Holland Park roundabout from Shepherds Bush, going up the empty nearside lane, the stereotypical dark-coloured, private hire people-carrier pulls from a stationary middle-lane queue behind a bus into my lane without indicating or checking in his mirrors.”

He continues: “I end up in front of him anyway, still rolling towards the lights; he keeps gunning the engine and gets very close to my rear wheel. Stop at the line, unclip left foot – this turns out to be important - I turn and shout “Mirrors!” at him (no swearing or dodgy hand gestures).”

What happened next is every cyclist’s worst nightmare, and as TchmilFan says, if he hadn’t unclipped from the pedal, he might not be here to tell his story.

“He then drives at me and the bike gets pulled under the car,” TchmilFan continues.

“The bike is twisting underneath me but I manage to unclip. He drives off up the A40 spur road with the bike underneath sparking away as the Ti axle in the Speedplays gets dragged along the road.”

When the driver eventually stopped, it wasn’t to check on whether the cyclist was uninjured. “Apparently he stopped about 200m up the road to take the bike out and then drove off. I was told that the police visited his family, got them to call him on his mobile and told him to report to the station,” says TchmilFan.

He adds: “Many witnesses, lots of people saw the whole thing and were gobsmacked. All happened so fast that I had very little time to react emotionally and physically. I just had a few scrapes, lucky when compared to the road-smearing I could’ve had. I think it’s added to my increasingly jaded world view, lowered my trust of all road users (cycling red-light runners included grrrrrrrrr) and, since the last bike show, I’ve been riding with a Muvi video attached to my rucksack.”

The driver was sentenced last month to six months’ imprisonment for dangerous driving and banned from driving for two years; not long enough, it could be argued, for someone who could well have taken a cyclist’s life.

We wish TchilFan and all our readers safe riding in the future.