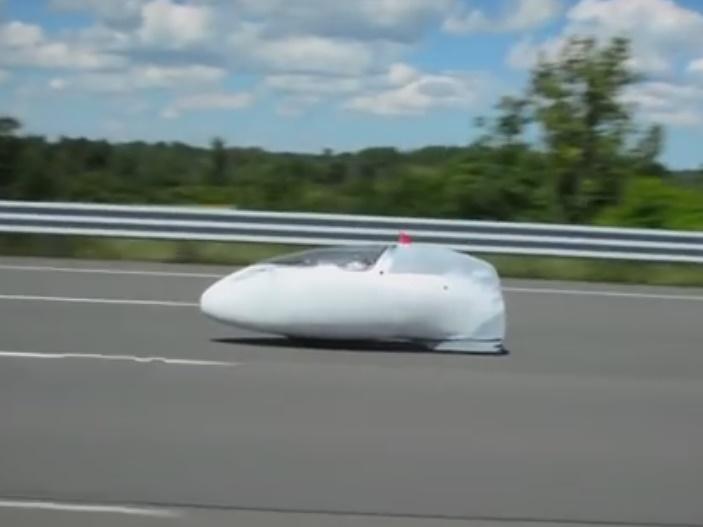 The Canadian team that broke the world record for human powered speed has improved on its mark, as has the team which recently broke the British record. Todd Reichert and Toronto-based Aerovelo won the World Human-Powered Speed Challenge in Battle Mountain, Nevada, after managing 86.65mph (139.45km/h), while Ken Buckley reached 75.3mph (121.2km/h) for The University of Liverpool Velocipede Team.

CBC reports that Reichert broke his own record twice in two days during the week-long event after setting the previous world record of 85.71mph (137.9km/h) last Thursday.

Competitors are given 8km to gain momentum before reaching a 200m flat section where speeds are measured and recorded.

"This year, we were just blasting down that course," said Reichert. "It just happened so quickly. Within a minute, you're over 100 kilometres an hour. At that point, you're just flying."

The Liverpool team – a joint project between all three universities in Liverpool – had already set a new British record of 69mph (111km/h) when they suffered a crash in one of the heats. A sudden gust of wind and an unexpected bump in the road combined to cause Ken Buckley to lose control of the ARION1 bike while travelling at 55mph.

Fortunately, he was unharmed and within four hours, the team had stripped the bike, cleaned the shell and components and reassembled everything. Another of the team’s pilots, Dave Collins, then set a new best of 70.6mph (113.6km/h) before Buckley reclaimed the record a few minutes later.

You can see footage of Dave Collins’ run below.

Here's a video of Dave Collins piloting the ARION1 on his record breaking run of 70.6 mph, which was broken minutes later by Ken Buckley who reached 75.3 mph!Congratulations to both riders, who are now the fastest two people in Britain! #ARION1 #ULVTeam University of Liverpool Rathbone Brothers Plc