British brand Kinesis has built up a fine reputation with UK cyclists in the 15 years it has been developing and evolving its model line, and for 2016 it has increased its commitment to disc brakes, with the new GF_Ti Disc, 4S Disc and 5T Disc. It’s also committed to the requirements of cyclocross racers with its new CX Race designed specifically for the task of bashing around a muddy field for an hour at your max heart rate. 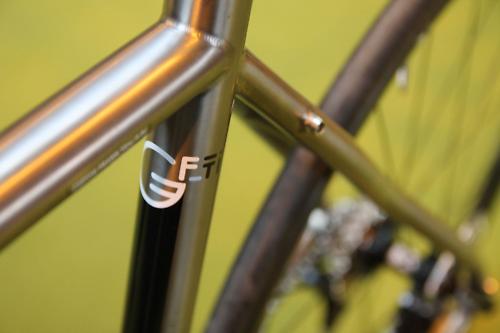 The Gran Fondo Titanium, to use its full name, has been a well-received road bike. It got a glowing review back in 2013 when we described it as providing “superbike capabilities in a frame that is just at home on the commute, audaxing, sportives and much much more”. The addition of disc brakes to a titanium frame designed for long distance riding makes a lot of sense. There’s quite a bit of demand for this sort of bike, and other brands have been offering such bikes for a little while now, so it’s likely the GF_Ti Disc will be eagerly received, especially as we’re heading into winter soon. The GF_Ti Disc frameset will cost £1,799.99. 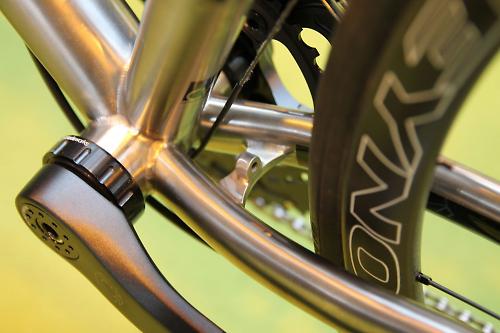 What do you want to know about this new bike, then? Well, you do want to know it’ll accommodate up to 30mm tyres with mudguards, 32mm without, providing plenty of tyre choice to suit your riding preference. The tubeless is cold drawn seamless titanium with internal cable routing, and it’s modular so it’s compatible with a Di2 groupset if you wanted to go down that route. The titanium seat clamp has been rotated around so the bolt is at the front, which should protect it from rear wheel spray if you’re not running mudguards. The down tube logo is laser etched and looks brilliant in the metal, and the tapered head tube has an engraved badge. Plugged into the head tube is a new fork, a carbon fibre item that Kinesis has developed itself, and has its own mould for. It weighs a claimed 425g.  While the headset bearings are hidden inside the frame, the bottom bracket is an external type. 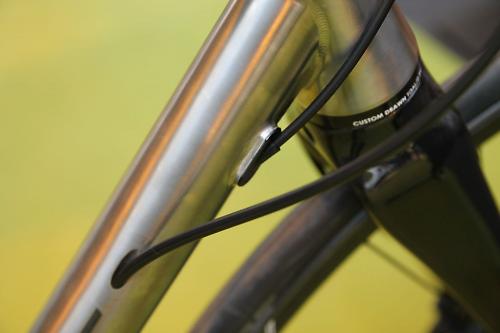 Kinesis has chosen to use Shimano’s Flat Mount disc brake standard, which makes sense as most brands are starting to adopt it. It provides a clean appearance and even more once we see more flat mount specific brake caliper - Kinesis had one of the new TRP Spyre flat mount calipers on a Pro 6, here’s a photo of it. 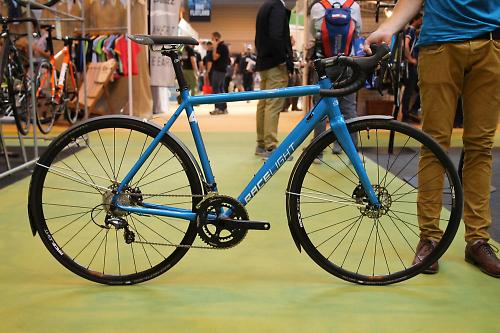 The Racelight 4S Disc is another new bike and replaces the previous model with a new frame that is compatible with disc brakes and long drop caliper brakes. The frame uses the new Flat Mount disc brake caliper standard so, if you decide to go with rim brakes, you don’t have unsightly disc mounts ruining the clean lines of the bike. To accommodate the two different braking systems, the dropouts can be converted between 130 and 135mm. The 4S stands for four seasons and is intended to be a bike fast enough to ride sportives in the summer, and with a set of mudguards fitted, take you through the winter. With the popularity of disc brakes, it is the perfect candidate for disc brakes, and at £649.99 for the frameset, it’s a very attractive price. Do you want wide tyres? The 4S will take up to 32m tyres with mudguards, wider still if you ditch the mudguards. It’s a decent weight is the frame, with a 54cm coming in at as claimed 1,490g. 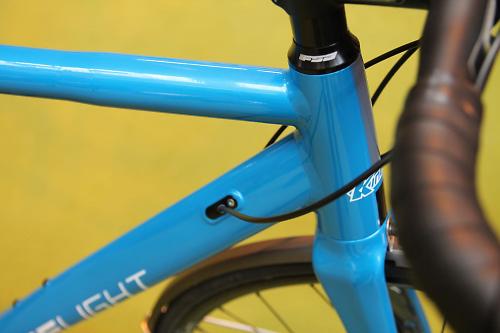 The frame has internal cable routing and it’s compatible with electronic groupsets. 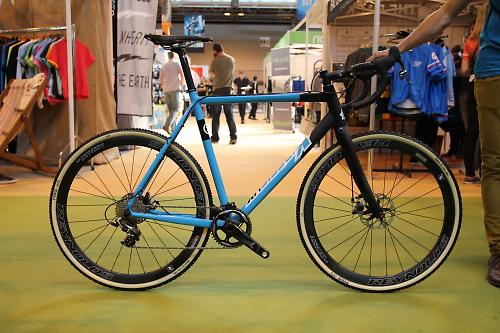 The other brand new bike is the Crosslight CX Race (£549.99). Kinesis has long been popular with cyclocross racers as it has offered cheap aluminium frames that make a good starting point if building up your own bike. Many people buy cyclocross bikes not to race cyclocross, but as winter training bikes and for commuting, often making use of the mudguard mounts. 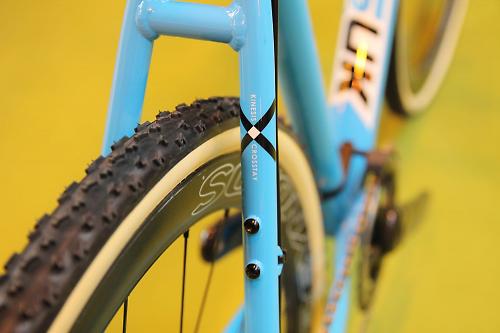 The CX Race is unashamedly designed specifically for racing. There are no concessions to general purpose versatility, so you won’t find any mudguard or race mounts. Heck, there aren’t even any water bottle cage mounts. The frame is intended to be built with single ring groupsets, so there’s no front mech hanger. You could a front mech, however, the routing exists for it. Cyclocross racing is getting more popular all the time so this new model should appeal to the racing enthusiasts. It’s compatible with disc brakes and cantilevers, using the Flat Mount for the disc brake calipers. The frame is made from Scandium tubing so it’s lightweight, and each tube has been carefully shaped. Both the top tube and down tube have a D-shape profile, the down tube so you can “grab and go”. 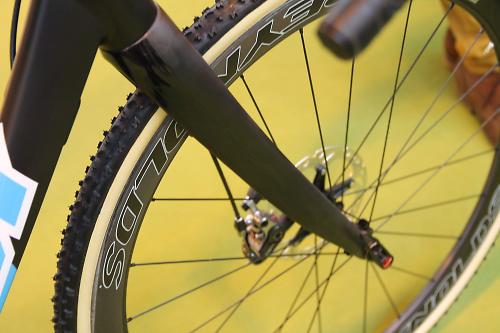 There’s a tapered head tube and Kinesis will be supplying it as a frame only, leaving you to choose your own fork. This bike has been fitted with the new TRP carbon fork, which is compatible with 12 and 15mm thru-axle wheels.

Where does that leave the Pro 6 (£649.99) you might be wondering? It’s still available, and Bruce from Kinesis told us that the extra versatility of this model over the CX Race (it has mudguard and bottle cage mounts) will make this the natural choice for any cyclocross fans that want a bike able to race on, but also general riding duties as well. 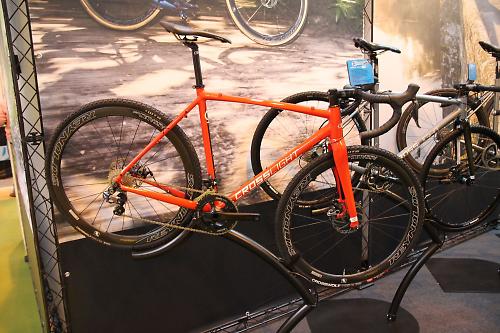 There’s capacity for up to 40mm tyres and it uses the Flat Mount standard - Kinesis are using this new standard across its entire disc road bike range. It has a similar geometry to the CX Race, but the frame isn’t as stiff, according to Kinesis. 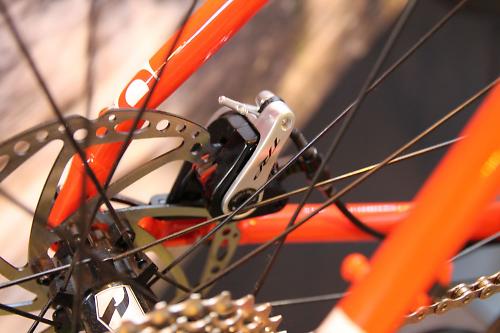 Like the other bikes we’ve already mentioned, the Pro 6 is available in a new 55.5cm size that has been introduced for 2016.

Lastly, the Crosslight 5T is available with disc brakes. It’s designed to excel at everything from the occasional cyclocross race to everyday commuting or weekend riding. The frameset costs £499.99. 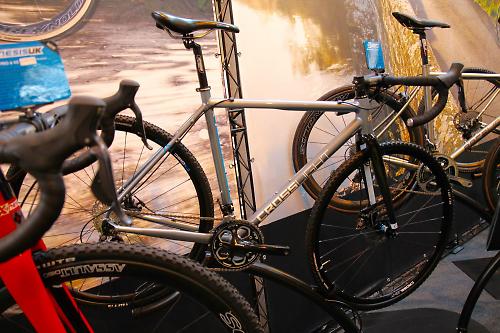 We'll have more information and first rides on these new bikes soon, plus we need to tell you about its updated wheels as well.

1
Patent granted for chainset that “improves cycling efficiency by more than 4%”
2
Speeding driver justified in breaking 30mph limit to avoid seriously injuring or killing cyclist, say magistrates
3
Farmer attacked cyclist with billhook after road rage row over cycle lane
4
Bespoked 2021: huge gallery of stunning bikes as UK's handbuilt bike show celebrates 10th anniversary
5
'Two and a half second' cycle lane is not a cycle lane, says council
6
Delivery driver who killed cyclist while high on cocaine jailed for seven years
7
What can be done about the latest spate of bikejackings? Plus red light-jumping cyclists, 'The Rules' + more on episode 9 of the road.cc Podcast
8
Questions remain regarding the delay in Specialized's Tarmac SL7 recall