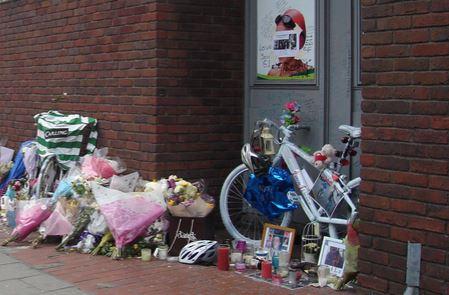 15-year-old died after being stabbed on north London's Caledonian Road in February...
by Simon_MacMichael

An 18-year-old north London man who fatally stabbed teenage cyclist Alan Cartwright, whose bike he was trying to steal, has been sentenced today to life imprisonment after a jury convicted him of murder. The judge recommended that Joshua Williams serve a minimum term of 21 years.

Alan, aged 15, was cycling with five friends on Caledonian Road, Islington, on the evening of 27 February when Joshua Williams and two other youths ambushed them, the incident caught on CCTV.

Two of the cyclists had their bikes stolen, but Alan, who managed to keep his as Williams tried to take it from him, was stabbed in what Jonathan Rees QC, prosecuting, told the Old Bailey was a “deliberate and gratuitous” attack, reports the Guardian.

The teenager managed to cycle on but a short time later collapsed and died outside the Cally swimming pool despite the efforts of paramedics, a police officer and a first-aider to save him.

Williams meanwhile made his getaway on the back of one of the two bikes that had been stolen, with a witness telling the court: “They were going quite fast and they seemed to be laughing.”

One week after the incident, Williams was taken to a police station in Islington by his parents, with his mother saying that he was there in connection with the incident on Caledonian Road. “Yes, he’s involved, he did it,” she said.

However, at his trial, Williams claimed to have an alibi, which was supported in court by his parents and his brother.

Mr Rees said that their decision to back his alibi showed that they had “decided to abandon their principles to support him in his lies to the court.”

Williams, who had pleaded not guilty, was also convicted yesterday of conspiracy to rob, a charge to which his two accomplices, Shaquille Roberts, 18, and a 16-year-old youth had already entered guilty pleas.

After Williams was found guilty, Alan’s mother, Michelle Cartwright, said: “Life without Al is killing me as his mum. It’s also had devastating effect on his family.

“He loved his dad, Al senior. Al has not been able to go back to work since this happened.

“He says he cannot see a future without him. He was our loving boy – our only son,” added Mrs Cartwright, who was eight months pregnant with her third child at the time of Alan’s death.

Detective Chief Inspector Chris Jones of the Metropolitan Police said: “I’m pleased with today’s verdict. I’m pleased the jury rejected Williams’s claims he was not responsible for his crime.

“I hope it reminds young people who may consider carrying a knife that they face some very real consequences.”

Shortly after Alan’s death, the head of charity The Safety Box which offeres self-defence lessons to young people through their schools warned that bike-jackings were an increasing problem.

Nathianiel Peat, who founded and runs the charity, said that older youths were targeting younger teens to steal their bikes to either sell them on, keep them for themselves, or as part of a gang initiation.