Eurobike was a couple of weeks ago now but we’ve still got more pictures of beautiful bikes to show you.

A couple of the bikes featured here are brand new – the Bianchi Specialissima and the reworked Storck Aero 2 – and the others have been around for a while; there’s no harm in reminding you of what’s already out there. Let’s crack on with the bikes. 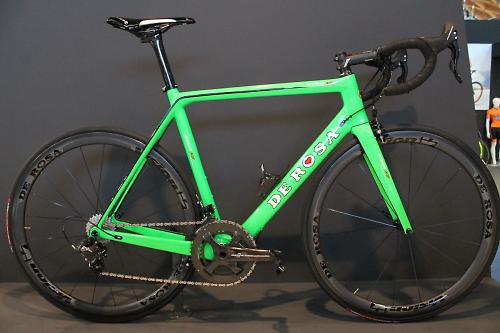 De Rosa launched the King XS last year and we borrowed one for the road.cc Italy Week.

The frame is made from a combination of T1000, T800 and XN10 carbon fibre, coming with a tapered head tube (1 1/8in to 1 1/4in) that’s designed to enhance front-end stiffness, and a slightly sloping top tube. 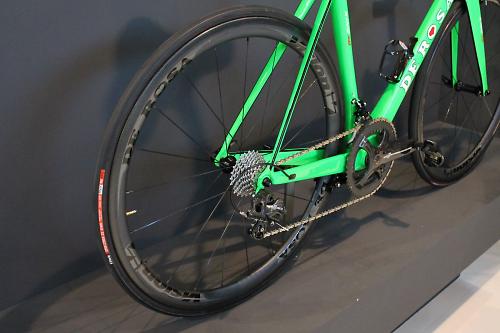 De Rosa has gone for direct mount brakes front and rear, meaning that each arm is attached directly onto the frame/fork rather than via a central bolt, the idea being to reduce flex. The groupset here is Campagnolo Chorus.

What do you reckon to the green finish? Is that doing it for you, or not? 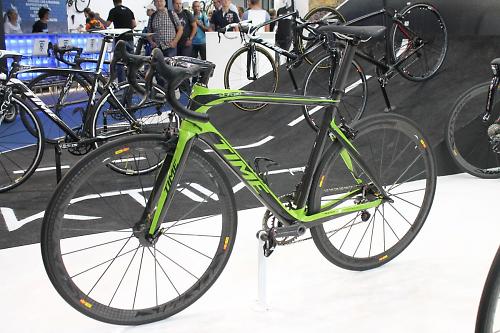 Another green - well, part green - bike next. We first reported on the Time Skylon aero road bike from last year’s Eurobike, but it’s certainly worthy of another look.

It is built with an asymmetric seat tube, Time taking the material out wider on the non-driveside to add to the stiffness. It also uses a large-section head tube for more rigidity at the front end, and a BB386Evo bottom bracket for stiffness through the middle. Time claims a frame weight of 945g. 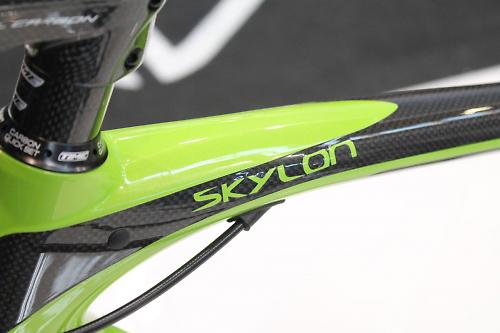 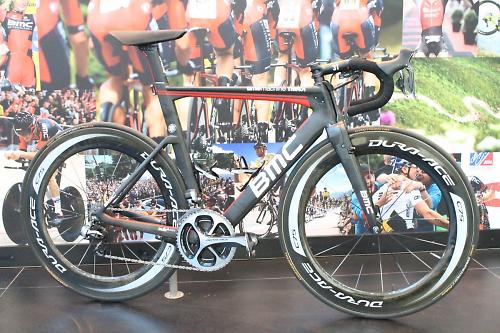 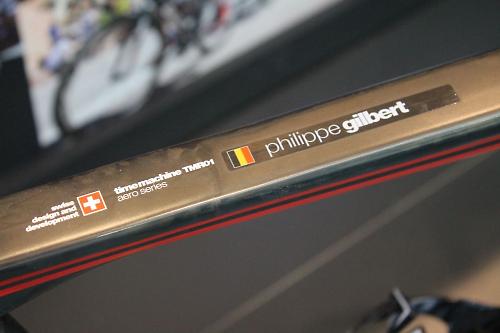 The TMR01, BMC’s first aero road bike, has been around for a couple of years now. 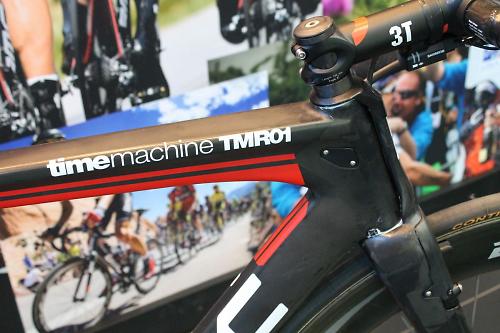 BMC uses truncated wing profiles for the main sections of the frame and the rear brake is tucked away behind the bottom bracket for improved aerodynamics. 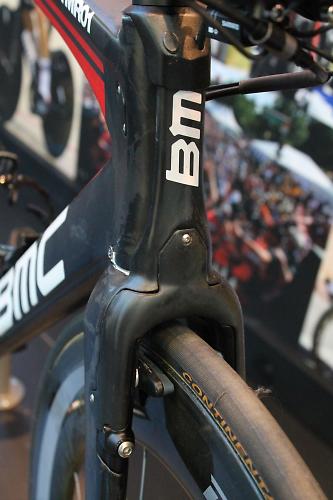 The front brake is integrated into the fork to help manage the airflow in that crucial area.

The saddle is Fizik’s Volta R1 which is curved from side to side but very flat from front to rear. The idea is that you can slide along it to alter your position and avoid discomfort.
www.bmc-switzerland.com

This Giant Propel Advanced SL is finished in the colours of Giant-Alpecin, the team that boasts such riders as John Degenkolb and Marcel Kittel. 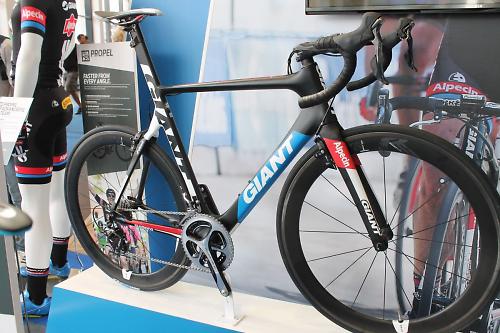 Giant claims that its AeroSystem Shaping Technology – which means that the engineers have designed the tube shapes using CFD (computational fluid dynamics) and wind tunnel data to improve aerodynamic efficiency – saves 12-36 seconds over a distance of 40km at a speed of 40km/h compared to key competitors (no, that claim doesn’t quite make sense; presumably it means that the Giant would be going that much faster for a given power output).

The Giant Propel Advanced SL features an integrated seatpost and SpeedControl SL brakes that are hidden behind the fork and the seatstays.
www.giant-bicycles.com 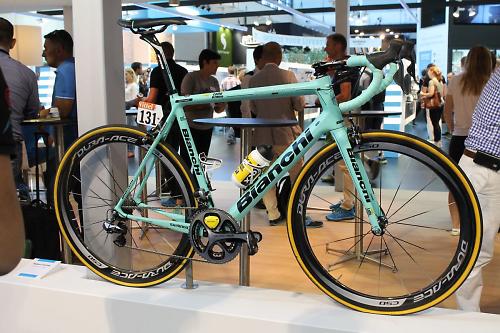 This Bianchi Specialissima belongs LottoNL-Jumbo rider Robert Gesink who finished sixth in this year’s Tour de France – or, at least, it’s a copy of his bike.

The Specialissima is the odd one out among the road bikes here in that it’s not designed with aerodynamics in mind, it’s all about light weight, Bianchi claiming a frame weight of 780g (for a 55cm model) and a fork weight of 340g. 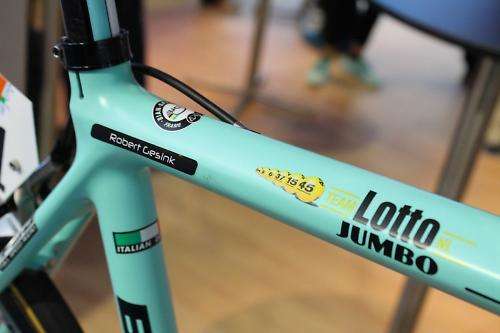 The frame is also notable for its use of CounterVail (CV) technology. In short, that means a viscoelastic material is embedded within the frame’s carbon layup, the idea being to cancel out road vibration to reduce muscle fatigue and save energy while improving handling and control. 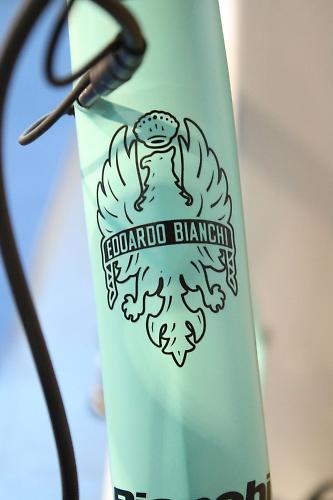 Check out our First Ride on the Bianchi Specialissima from earlier in the year.
www.bianchi.com 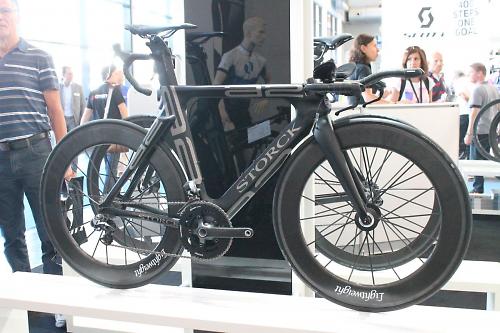 What’s that you say? This isn’t a road bike? Well, you’re absolutely right, so think of this as a time trial/triathlon bike bonus. 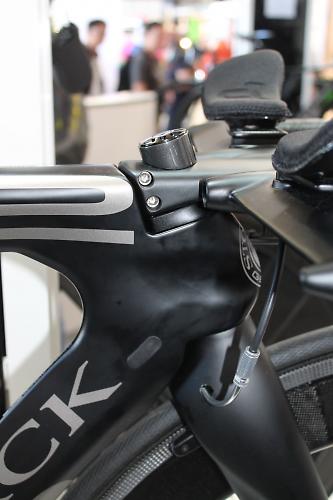 Storck’s Aero 2, which hasn’t been available recently, has now been reworked. It comes with a PressFit bottom bracket and wider stays and forks now, so it can accommodate wider tyres.

As we mentioned in our story on the new Durnario endurance bike last week, Storck is now producing frames in three different levels – Platinum, Pro and Comp – varying the grade of carbon fibre and the layup. 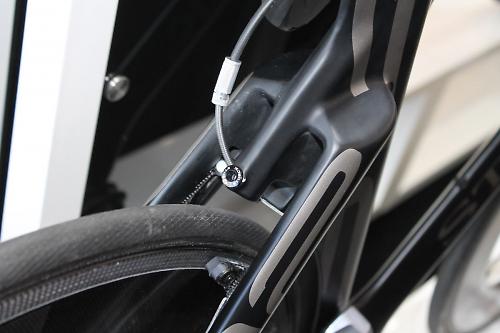 This is the A2 Platinum (above) and in this build it weighs just 6.9kg (15.2lb). That’s astonishingly light for a TT bike. 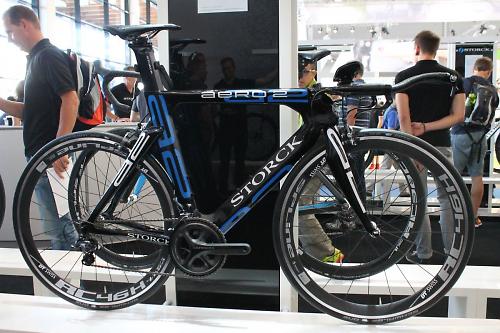 Complete A2 Comp (above) bikes, with standard cantis rather than hidden brakes, cost from £3,119. 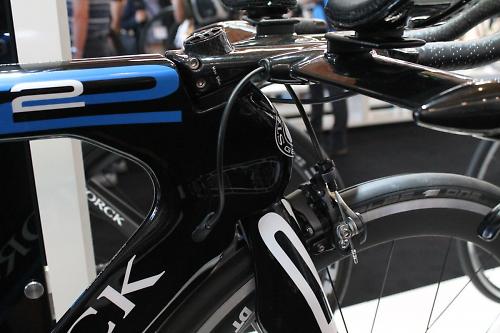