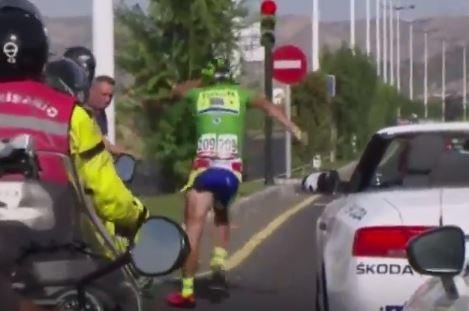 Peter Sagan is out of the Vuelta after being hit by a neutral service motorbike yesterday. The 25-year-old’s Tinkoff Saxo team said he had suffered injuries including first and second degree burns in the incident which happened in the closing kilometres of the stage to Murcia, which Sagan was favourite to win.

In a statement, the team said that the Slovak rider suffered wounds and burns of first and second degree on the left side of his body, from the hip to the lower leg. In addition, he has a contusion on his left forearm with an intra-muscular hematoma.

The team's doctor, together with the sport directors at the Vuelta, decided that Sagan cannot safely continue the race with the injuries he suffered. As a result, he will fly back home as soon as possible.

It added: “The entire Tinkoff-Saxo team is disappointed and upset that Sagan's participation in the race comes to such an abrupt end. The Vuelta a España is one of the season's most important races and both Sagan and the team had high expectations.

“At the moment of the incident, Sagan was wearing the green jersey, he had won one stage, was set to target Stage 8, while being in serious contention for later stage wins.”

In the immediate aftermath of the incident yesterday, Sagan was shown on television kicking out at a neutral service motorbike as well as at his own bike.

Sagan said afterwards: “There was a breakaway in front and, together with a rider from Lotto-Soudal, I was attacking to bridge the gap. Then the group reached us from behind and I was sitting in second place, while another Lotto-Soudal rider came to the front to pull.

“So, I attacked again to reach him, as he was about 10 meters ahead. When I reached him, I signaled to him to go ahead as I was staying on his wheel. I moved to the left and at that moment a motorbike hit me. There was nothing I could do.
“I didn't even hear the motorbike coming. I find it unacceptable that a motorbike tries to weave its way into the group at such high speed. They accelerate and try to sneak in when they see an empty space.

“However, they don’t take into consideration that a rider might fall in front of them or change direction. They go extremely fast and the difference of speed compared to the riders is enormous.”

To add insult to injury, Sagan’s reaction to the incident resulted in him receiving a fine of 300 Swiss Francs. He said: “I will, obviously, pay it but I consider it unjust.”

He called for stricter rules to be put in place to protect riders, saying: “Unfortunately, it isn't the first time such an incident happens. Even if motorbikes are forced to go through a group of riders, they should do it very carefully and not recklessly.

“In my opinion, motorbike drivers don't take the safety of the riders in consideration seriously. Fortunately, my injuries aren't very serious but can you imagine what would have happened if he had ran over me?

“If I had crashed alone or with another rider, I would have considered that to be part of the sport. However, being hit by a motorbike of the race organisation shouldn't be acceptable.

“The safety of the riders should be an absolute priority and all vehicle drivers involved in a race must be more attentive. I really hope this incident is the start of a series of necessary changes in the way races are organised.”