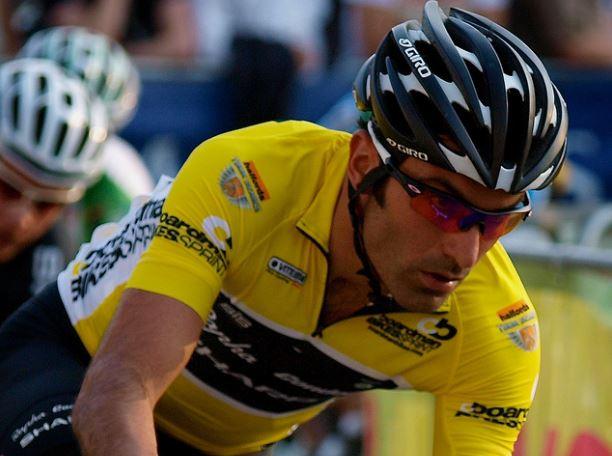 Tour of Britain will be 2009 British road champ's final race for Men in Black...
by Simon_MacMichael

Kristian House, the last rider from a team below UCI WorldTour level to become British national road champion, is leaving JLT-Condor after eight years. The 35-year-old will race for John Herety’s team for the last time at the Tour of Britain, which starts on Anglesey on Sunday 6 September.

A versatile rider whose palmares include an overall win at the Tour of South Africa and the mountains jersey at the 2012 Tour of Britain, as well as victories in Premier Calendar and Tour Series victories, House was born in Kent.

He was brought up in Austin, Texas, however, where he discovered cycling while at high school and retains an American accent, which together with his laid-back style has led to him being nicknamed ‘The Dude.’

When he beat riders including Mark Cavendish to the national championship at Abergavenny in 2009, Rapha, which sponsored his team at the time, included the Texas flag on the back of his red, white and blue jersey as a nod to his upbringing.

This season, he won the Milk Race in Nottingham and the Motherwell round of the Pearl Izumi Tour Series, and also rode the inaugural Tour de Yorkshire.

Charlie Pearch, a partner at Jardine Lloyd Thompson which sponsors his team, said: “Kristian in our opinion is one of the legends of the British cycling scene.

“He has been a foundation stone of The Men in Black and has been a good friend to JLT.

“As such we are saddened to see him move on, but in these exciting times for British cycling we wish him all best wishes for the future.”

Grant Young of co-sponsor Condor Cycles added: “I will miss Kristian riding for Condor; he was a consummate professional and great ambassador. Everyone looks for new challenges to keep their drive and spark; I wish him all the best next season.”

House hasn’t yet revealed his next move but in a message on Facebook said: “After eight seasons with the 'Men in Black' the ToB will officially be my last race with the team.

“I’d like to give a massive thank you to Condor, JLT and all the other sponsors over the years that have been a part of this amazing team.

“I would also like to thank John Herety, who has been a huge part of my career and has supported me through some of the hardest times on and off the bike.

“An announcement of what comes next will follow in the next couple weeks. Thanks everyone for the massive amounts of support! Much appreciated.”

He signed off: “The Dude abides” – a slogan that also appears on his headtube cap, together with a depiction of the Jeff Bridges character from cult movie, The Big Lebowski.