Cycliq, the people that brought the world the Fly6 rear-facing camera light, have been working hard on a new product, the Fly12. It's an integrated light and camera for the front of your bike and it was successfully funded on Kickstarter earlier this year, with 1,720 backers pledging a grand total of $668,721 AUD to bring the product to life. And we met up with Andrew Hagen of Cycliq at Eurobike to have a first play with a functional prototype. So what's to know? It's a bigger and more fully featured bit of kit than the Fly6, and that's reflected in the price, which is likely to be around £220 in the UK. It's quite weighty, but no more so than a separate camera and light, and of course it only takes up one mounting spot on your bike. Much of the weight comes from the batteries: the Fly12 contains two batteries for a grand total of 5400mAh of capacity; compare that to other cameras which normally don't have more than 1500mAh and you'll see how Cycliq manage to get an eight-hour runtime for the camera. That's your whole sportive, then. 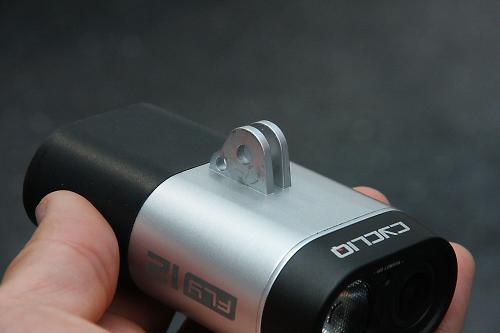 It attaches to your bike using the same mount technology as a GoPro, so you'll be able to mount it on your bars or hang it from underneath an out-front mount from the likes of K-Edge. the 400-lumen light runs off the same battery of course, so having that on too drops the run time down to a minimum of two hours with the light on full blast. It has a number of intensity settings and flashing options, more on that later. 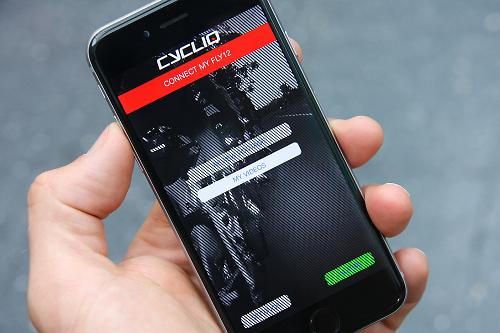 The big difference is that the Fly12 is WiFi enabled, and designed to work in tandem with an app on your smartphone. It can do all sorts of clever stuff.

The Fly6 is predominantly a passive device, gathering data in case anything untoward happens on your ride. The Fly12 is a more social beast. Once your Fly12 is connected with your phone, the first thing you can do is change the settings. The camera will record in 1080p up to 45 frames a second, or 720p up to 60 frames a second. The light has thee constant and three flashing modes. You can toggle through them with the power button, but you can also select the ones you want from the app. So if you don't want flashing modes, you can just turn all of those off. If you've been out on a ride and you've stopped at a cafe, you can use the app to browse through the video you've shot. The camera can stream lo-resolution footage to the app for viewing, and if you want to crop out a particular highlight you can do that within the app. The Fly12 will then crop the footage and upload the full-resolution version to your phone so you can share it in whatever way you fancy. Cycliq will also be adding the capability to add tram lines to the footage. They'll show how close other vehicles are to you, and if you live somewhere that has a minimum passing distance law that could well be handy if someone buzzes you on a ride and you end up in a hedge.

As well as that there will be two alarm modes. The first is an incident alert: the Fly12 will use accelerometers and axis sensors to guess if you've had a stack. So if there's a big impact and then the bike ends up on its side, the camera will assume you've had some kind of incident and will be able to interact with the app to send a text to an emergency contact, in the same manner as other devices such as the ICE Dot.

There'll be a theft alarm too. The camera and app can tell how far you are from the bike from the strength of the WiFi signal. So if the bike starts moving and you're not on it, it can alert you. 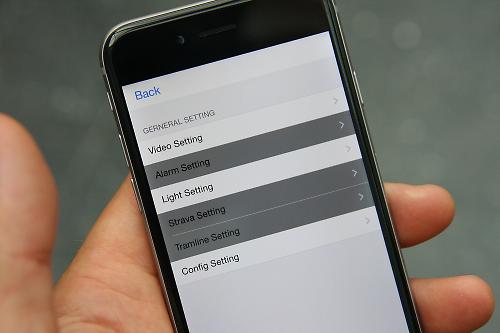 The greyed out menu items are still works in progress

One other interesting development is integration with Strava. The Fly12 timestamps footage using the GPS time signal from your phone. Using the Strava API, you'll be able to overlay data onto the top of the video, and that'll allow you to make some rich video. If you keep it to 15-second sections and upload them to Instagram, and you've linked your Instagram account with your Strava one, you'll even be able to display the vids on your Strava ride.

That's a fair bit of interesting stuff from one device. Final prototyping is happening now, and the Kickstarter orders will be fulfilled in the new year, with units likely to be available for sale in the Spring.